You can listen to and download the show from here

“In your second album as Obsil, Distances, out on Disasters by Choice, you have also included field recordings from Bagno Vignoni. Did you specifically choose it because it was also the location for a famous sequence in Andrei Tarkovsky’s Nostalghia?I chose this location for two reasons: Nostalghia is one of my favourite films, and also, I hold very fond memories of Bagno Vignoni from many years ago. In both cases, the sounds of the thermal baths are associated with tender and intangible images: on the one hand there’s the film, therefore fiction, on the other, there are my memories that become further and further removed from the present with the passing of time and are destined to repeat themselves “statically” as if they were scenes from a movie.” 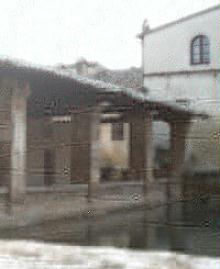 Viandanti (Nostalghia paths, homage to Andrei Tarkovsky) was built using:
• field recordings taken in Bagno Vignoni (Siena – Italy) in September 2012. This little Tuscan town is one of the most peculiar Tarkovsky’s Nostalghia location and it’s characterized by a rectangular tank in place of the main square, which contains water that comes from the underground hot springs
• recordings from the Nostalghia’s set.
• various field recordings taken in Val di Merse (Siena – Italy) the area where Giulio was born and where he actually lives. In Val di Merse is also located the Abbey of San Galgano, another Tarkovsky’s Nostalghia location. The field recordings comprise sounds from a procession, the melting snow, the small river Merse flowing…
• granulized fragments of the Symphony No. 9 in D minor, Op. 125 by Ludwig van Beethoven. The symphony is the preeminent composition of the Nostalghia’s soundtrack.

The recordings of the hot springs taken in Bagno Vignoni some days ago slowly merge with sounds coming from a set of 30 years ago, like following eyes from a middle ‘800 daguerreotype portrait with one’s eyes.
The aquatic sounds flow like a tale with the other different sounds coming on their path like wayfarers, sometimes they follow the movie narration and mood.
The granulized fragments of Beethoven’s Ninth Symphony come like a soundtrack that suspend the time.
Giulio Aldinucci was born in Siena (Italy) in 1981.
He is active in the field of electroacoustic music for year now, working in various research fields: from the soundscape to the musical composition for traditional instruments.
From 2006 to 2011, under his project name Obsil (OBserving SILence), he has published three album on CD. A composition from his album Vicino, released by the Irish label Psychonavigation, was chosen from the Wire for the The Wire Tapper 25 CD, enclosed to the April 2011 issue.
The Obsil project ended in 2011; after that he release an ep for Laverna and in August 2012 the Japanese labelNomadic Kids Republic released on CD Tarsia, his first album published with his real name.
He also wrote music for theatrical performances, video art, short movies and he has also contributed to some installation, like Sounding Doors (part of the Talking Doors project by Julijonas Urbonas. This work won the Award of Distinction in Interactive Art at Prix Ars Electronica 2010).

This entry was posted in #29 and tagged Radio Papesse. Bookmark the permalink.