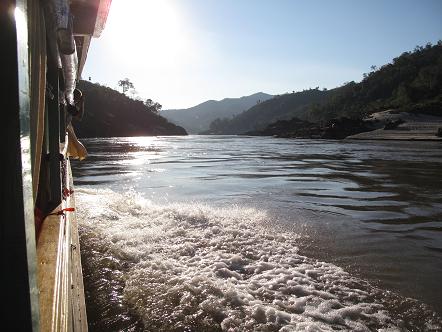 I’ve made some binaural field recordings when I was in Laos in january 2009. But I couldn’t find what to do with those sounds until I met Sisada, a young lao woman, living in France and trying to preserve the practice of Kamouh language in her family. She told me it was quite difficult to convice the young generation to learn their original langage. We decided to work together on this piece which mixes kamouh dialect, lao, even sanscrit, a touch of english and french…

The Soundtrack is made of sounds recorded :
_ in a slow boat, on the majestic Mekong, waiting for the departure from Luang Prabang to Huay Xai (border to Thailand)
_ in the Bokeo Nature Reserve (Northern Laos), where you can ear many birds, squirrels, deer, gibbons (only singing when the sun rises)…
_ in a buddhist temple, where monks were saying a prayer
_ on a little bamboo bridge crossing the Nam Khan river in Luang Prabang
_ in a lao restaurant
_ in a village near the Bokeo forest

This entry was posted in #29 and tagged Jet FM. Bookmark the permalink.