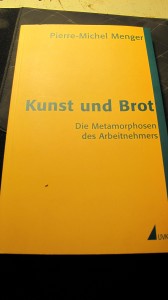 In 2012 Cirkulacija 2 collective returns to the habit of using language as medium for communication – and publicly: a format denoted as “salon” as aesthetic outlet.

In the first instalment we prepared a radio show discussion hopefully touching some of the important conceptual approaches regarding the public appearances of Cirkulacija 2. While more abstractly coded radio broadcast could be used, we decided for the more basic approach – the discussion, the talk.

The composition (of dicussion) was defined as open-minded, and with it we wanted to force upon us the topics that could potentially be emotional – or: the topics would have to be emotionally solved. It is of course the question of individuals’ different views on some very basic approaches.

The dynamics of a group over the years is a varying organism. Some things get forgotten, some topics get consumed, there is a constant fight against boredom and disillusionment. Some rituals and definitions have to be changed – and some new introduced. The production of meaning – the ideology?

The language is the CE broken english style – as one would expect it from an international group of artists. Boštjan Leskovšek, Borut Savski, Stefan Doepner and – for a brief time – Neven Korda took part in emotioning.

Cirkulacija 2 is collective established in 2007 by a couple of artists dealing with so-called new-media approaches, strongly linked to multimedia and technology, the socially engaged public observation and opinions resulting in actions and experimentation on all levels.

The title is taken from a book by Pierre-Michel Menger dealing mainly with the question of precarious economy of artists.

This entry was posted in #27 and tagged Radio Student. Bookmark the permalink.