Yet another annoying piece of radio art?

In the beginning there was the paraphrase. Starting from the search for radio art events to be reproduced we ended up looking into landmarks of radio history in connection with art– hopping from its beginnings to the digital turn.

Listen to a simulation of history and how it is digged out of its holes. 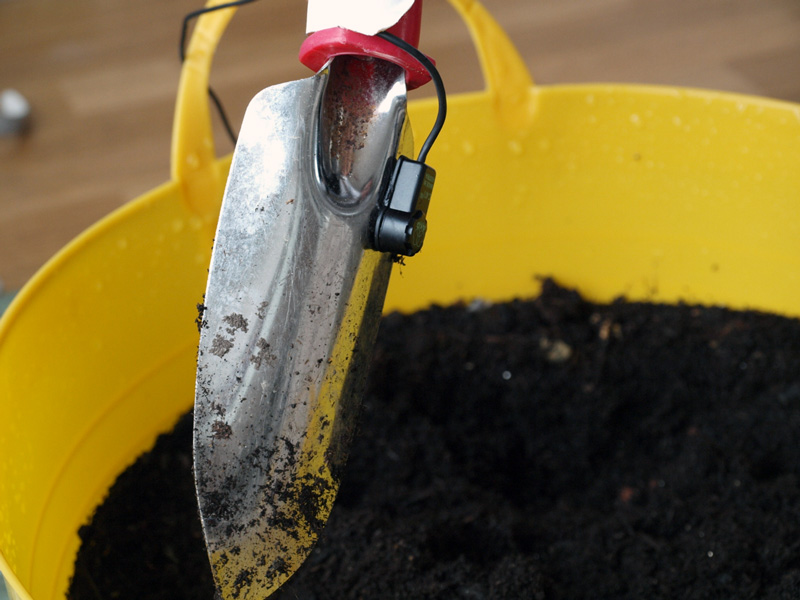 Ironic reenactment of GX Jupitter-Larsens performance in a small bin. The small scoop produces the sound of a shovel. 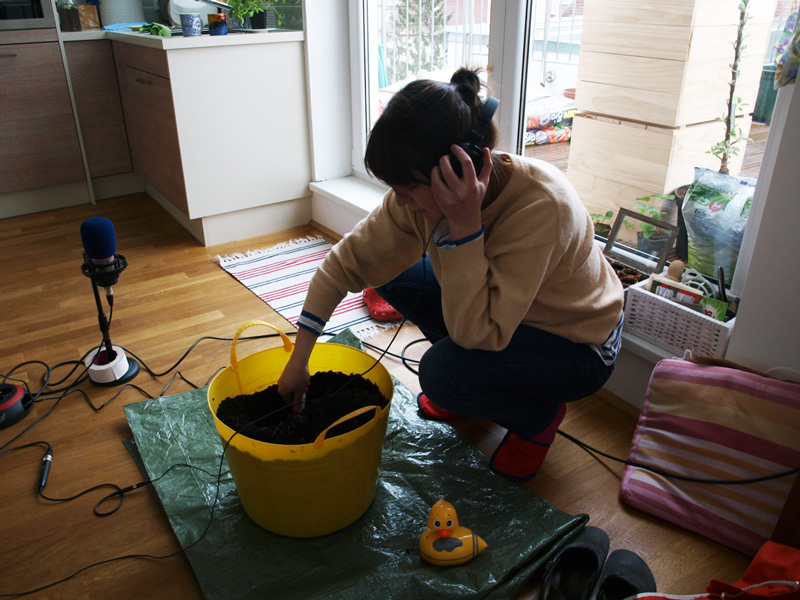 Kristina digging out the radios (including a duck-radio) that are tuned in the frequency of a small pirate-transmitter,playing the reenactments of the historical radio events we performed in the weeks before.

In search of elements of radio history, we are re-using the key idea of a performance by GX Jupitter-Larsen:

“Jupitter-Larsen performed by digging a hole in a garbage-bin full of dirt & small radios. All of the radios were tuned to static. So as the hole got larger, the radio static got louder. Entitled ‚Building Empty Holes’, this solo performance lasted 15 minutes.” The performance took place in Vienna in 1991 at the Museum Moderner Kunst.
Source: Website GX Juppiter-Larsen

The paraphrase alters the original by tuning the buried radios into the transmission of the simulated historical radio events. A mini pirate transmitter is used to transfer the signal from a nearby computer to the radios in the bin filled with soil. 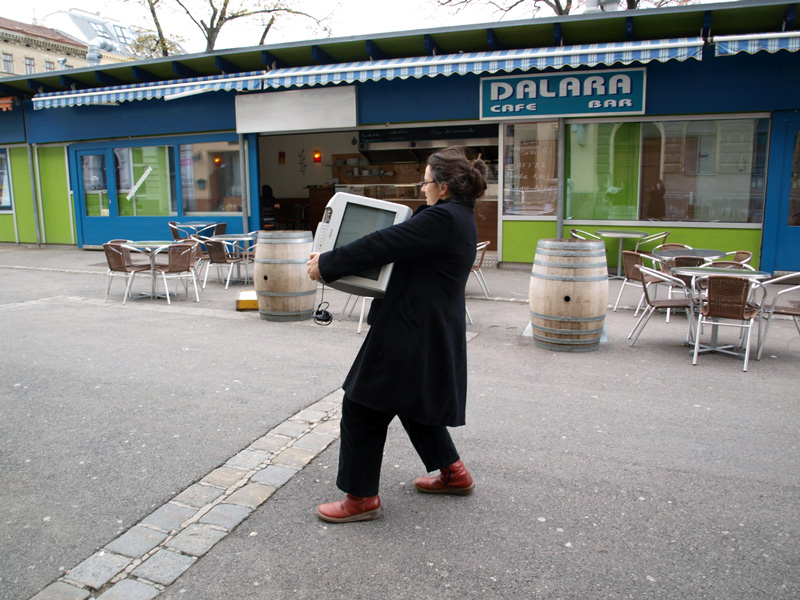 Lale is trying to find an old tube-tv to be able to receive the digital radio-signals with an analouge machine. 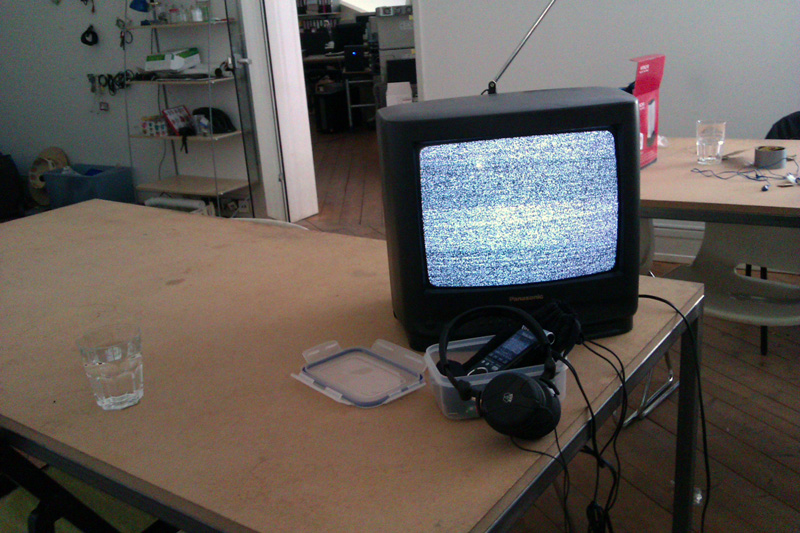 In Vienna the terrestrial channel 24 provides a digital signal on the video-cinch that can be recorded analouge.

The future claims: Radio turns digital on a terrestrial base. Will we lose low tech democratic access to the aether? In a first attempt the digital signals are ignored and being played on an analogue base. Hence, this is how the aether may sound in a couple of years if one refuses to invest in A/D changer. Rhythmic and annoying.

We paraphrased the first transmissions – terrestrical and via telephone line – transmitting salon music from the hotel “Intercontinental” into the dining room in a private appartement and sang the styrian hymn via a pirate radio transmitter.

Kristina is holding the antenna of the mikro-ukw-transmitter broadcasting the reenactment of Otto Nußbaumer's first radio-transmission, played on an old tube-radio in the back.The Styrian Hymne was sung by Lale, Judith and Christine.

The first wireless transmission of music and voice was successfully accomplished by the Austrian Otto Nussbaumer from the Technical University of Graz on the 15th of June 1904. Nussbaumer, at this time, was a constructor in the Institute for Physics at the Technical University, where he was employed in the area wireless telegraphy. After a lot attempts he finally managed in 1904, to transmit wirelessly music and voice through a self made transmitter. This transmission was audible for a distance of up to 20 meters through the rooms of the Technical University. For this important and historical moment, Nussbaumer transmitted the hymn of Styria, the Dachsteinsong, which was sung by himself. This led to proof that transmission of sound is possible. This pioneering feat was essential to the further development of radio. 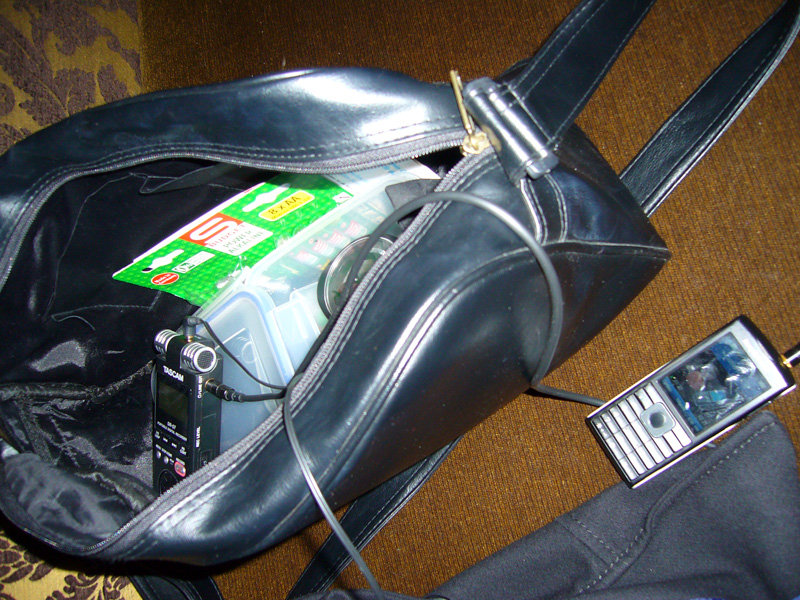 The assembling of the live-salon-music transmission via telephone-line.

In 1881, Clément Ader demonstrated the world’s first stereo transmission from the stage. It was transmitted from the Paris Opéra with his new invention: the Théâtrophone. It was a telephonic distribution system that allowed the subscribers to listen to opera and theatre performances over telephone lines. 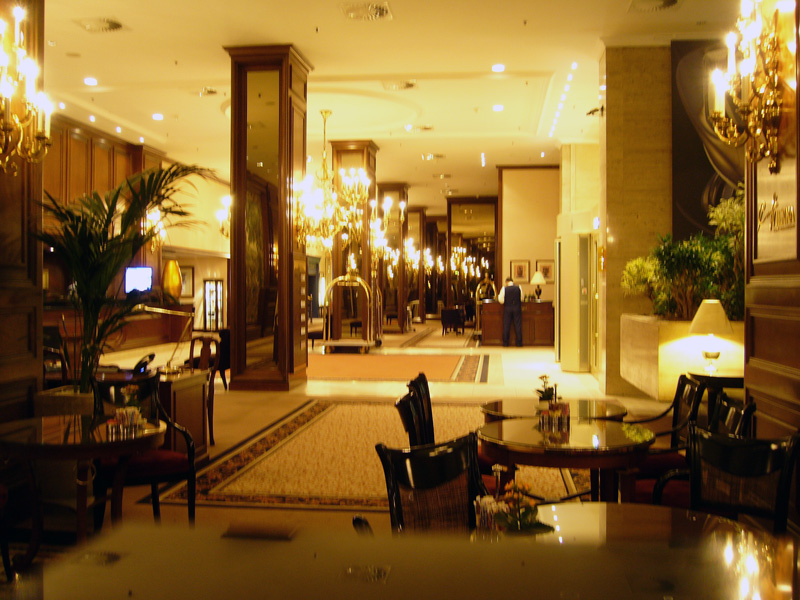 The bar and salon of the hotel intercontinental in vienna, the source of the cell-phone transmission, a reenactment of the theatrophone.

The loundspeaker are directly connected to a cell-phone, broadcasting live-music from the bar around 11:30 pm. (This time a crow is watching.) 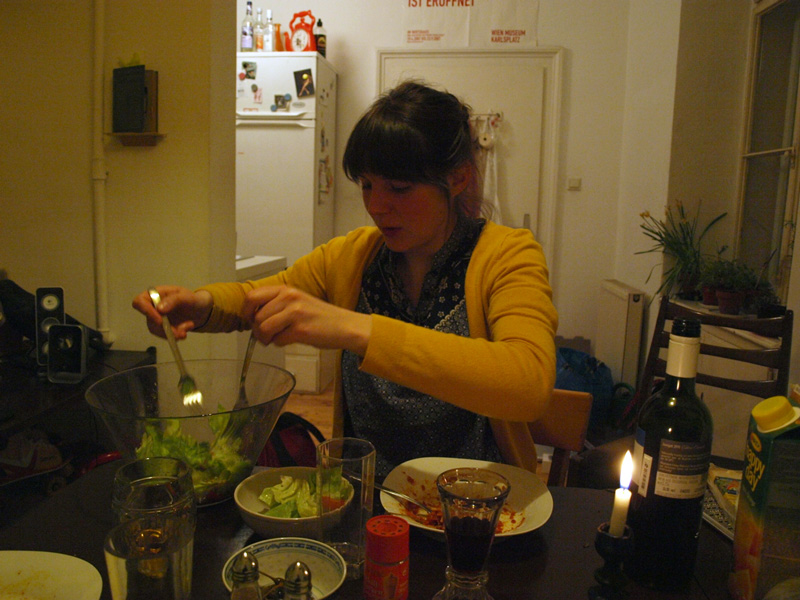 Karl, Fiona, and Kristina are dining while they are listing to the live-music.

This enabled the subcribers to stay in the comfort of their homes and enjoy their evening meal, while listening to the opera performance . 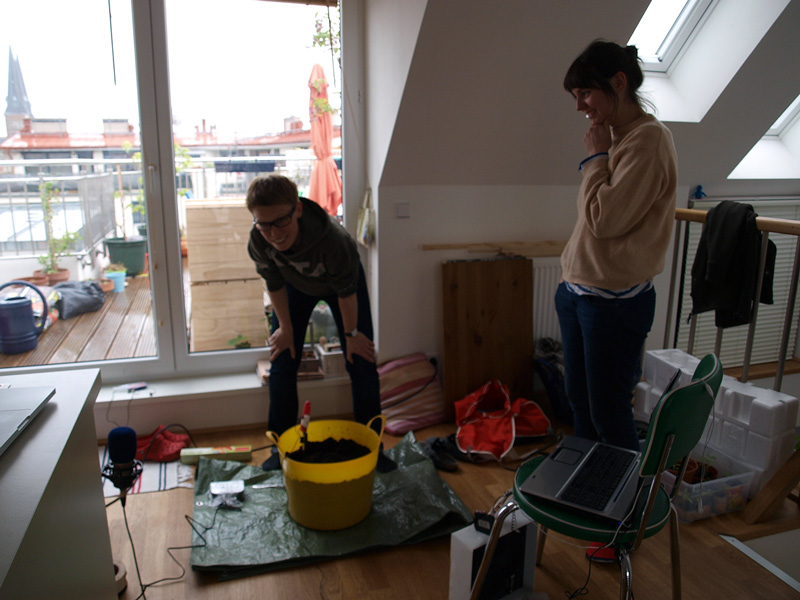 Kristina and Fiona digging out radios.

This entry was posted in #28 and tagged Orange 94.0. Bookmark the permalink.