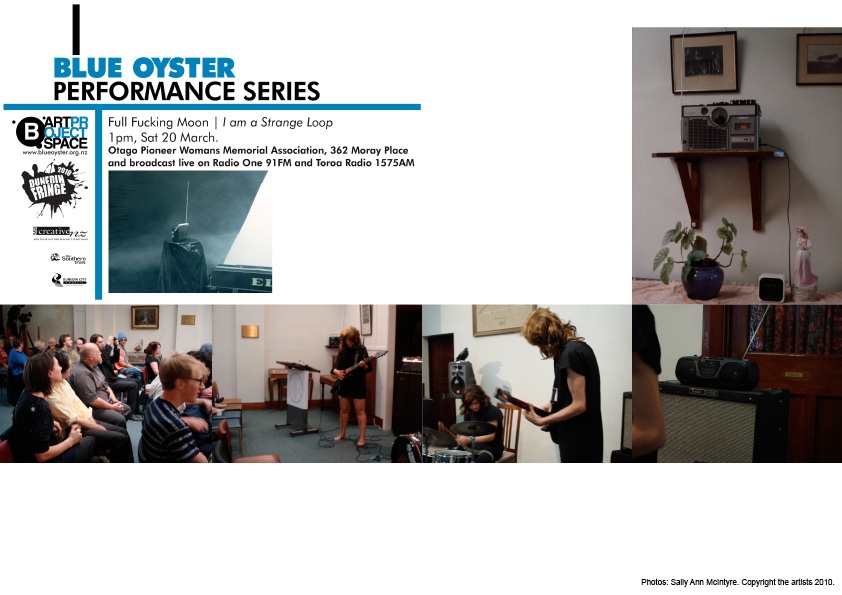 Documentation of a live event which doesn’t merely reiterate it, Full Fucking Moon’s ‘I Am a Strange Loop’, with its kaleidoscopic shifts, fragments and interwoven threads of live streams, opens the listener’s ear to the multi-dimensional non-linearity of radio space, its mazes, veils and etheric folds, its membranes and mirrorings. This piece’s original life was as a dual-stream simulcast across both FM and AM channels (the stations Radio One 91FM and Toroa Radio 1575AM, respectively), which began at 1pm and ended at 2pm on Saturday 20th April 2010, in Dunedin, New Zealand, a commissioned work by The Blue Oyster Art Project Space as part of their annual performance series.

In a gesture toward a form of ‘Rorschach Radio’, the AM stream became an inversion of the FM, and the artists also de-stabilised this dualism by opening up a third-space (at the historic Otago Pioneer Womans Memorial Association Hall, Dunedin) as a public listening arena / performance venue. At first empty of the physical presence of the artists and allowing the audience to roam, the space contained a scattering of radio receivers embedded in the nooks and crannies of its colonial architecture, as well as a social space where tea was drunk, conversations were had, newspapers were read, and eyes were closed in meditative listening. With the intimacy of the home-wireless set being something that could only capture the ‘total work’ in a sequence of twists and fractures, requiring the radio to be physically tuned as an instrument betwixt and between bands, (an action itself revealing the miasmic, shifting cloud of radio space), listeners present both at home and in this more public space (the latter by walking around the rooms where radios were distributed) each found their own stream within the cloud of possibilities, this listenership evoking radio as both intimate and communal, both territorial and boundless. The artists inhabiting the radiophonic streams then literalised their presence by arriving in the space, dressed in outfits that both evoked the spirits of colonial women’s meetings and more recent outsider pop ensembles, activating the instruments that had until this time remained a tableau of props amongst the other still-lifes in the room (radio receivers placed next to posies of fake flowers being a repeating theme in particular).

As befits radio’s multiform and fluid potentialities, this 1-hour performance was not the piece’s only destination, and this new edit speaks to the radia network as a series of distributed nodes, and to radio’s strangely present invisible material. ‘I Am a Strange Loop – Radia Mix’ begins with the radiophonic glossolalic cloud, clearing a way for the arrival of a human channelling of a spirit-radio, in which a psychic presence casts ideas on “transmissions” (dictations) from the cosmos as a poetics of the medium, and ends with a song called ‘Litany of the Oceans’, an FFM ballad about the moon, in which singer Bek Coogan intones the names of the astral body’s craters, thought to be the sites of frozen lunar seas, evoking the moon’s tug on the ethereric tides (and also perhaps calling to mind the United States military probe Clementine, whose investigation known as the ‘bistatic radar experiment’ in 1994 used a transmitter to beam radio waves into the dark regions of the moon’s south pole).

I Am a Strange Loop is a work created by artists who are deliberate misreaders of traditions, who shift mercurially within critical and primordial texts and methods. It is radio aware of its own material presence and spiritual history, as etheric and boundless as it is consolidating of community, as its artists shift effortlessly within the worlds of art and music, high art and pop culture, and their audiences and forms, calling for a listener who is equally multiple, who can inhabit not one cultural reference point, but many.

Edited and mixed by Bek Coogan & Torben Tilly from original recordings of the one-hour performance ‘I Am A Strange Loop’ by Full Fucking Moon, performed on Saturday 20th March 2010 at the Otago Pioneer Woman’s Memorial Association, and broadcast live simultaneously on Radio One 89FM and Toroa Radio 1575AM as part of the Blue Oyster Performance Series, Dunedin.

This entry was posted in #23 and tagged Radio One 91 FM. Bookmark the permalink.