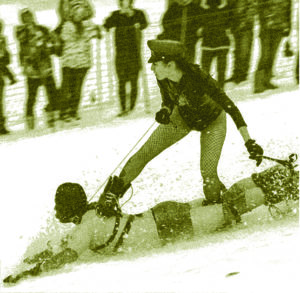 SHADOWSIDE OF SOUND is an ongoing project, dedicated to works by Rotterdam composers, known and unknown, who have fallen into oblivion. Progressive or conservative. Fairly or unfairly; that will determine history. As you know, there are various points of view regarding whether or not acceptance is there. In general, it can be assumed that the circuit must have the power to handle the work. The other view is a chimera of the one who gives himself a stunning victory before playing time is up.

In this radiopiece, especially constructed for the Radia Network, we focus on Julie Bruins Rampart. Coolhaven was already deeply involved in her work when they discovered the existence of her twins, Sybille and Plasma, who never really ‘met ‘her mother (after they were born that is) and were raised in Devon, UK. Coolhaven went there to interview the twins. The radiopiece exists of the interview and some of Rampart’s re-interpreted works by Coolhaven.

Julie Bruins Rampart (1922-2005) In her free evening hours, Julie Bruins Rampart composed lustily. Initially, her favorite instrument was the great Baroque flute. We see this instrument in most of her compositions. This changed later when she discovered the possibilities of the electric guitar-sound.Sometimes solo, but often in combination with other instrumentation. What makes Bruins Rampart’s work attractive are the often complex gesticular additions that her works contain. She often stages the performers in a tableau vivant and does not shy away from acting unorthodox. Her work was dismissed as amateurish, a-musical and immoral. Bruins Rampart was active in the VSSM (Study Group Sadomasochism Association) in Rotterdam. The VSSM regularly organizes game meetings. Bruins Rampart strived for inclusiveness. Her series of compositions seem to be based on various agreements and putting them into practice; the so-called “play”. In that sense, her works could be interpreted as politically emancipatory erotic pamphlets. Bruins Rampart came from the PvdA circles that believed in the makeable world at the time. Moralistic, socially critical and also formative.

interview recorded by Soundart Radio, thanks to Chris Booth.

This is a Worm/Klangendum production

This entry was posted in #49 and tagged RadioWORM. Bookmark the permalink.