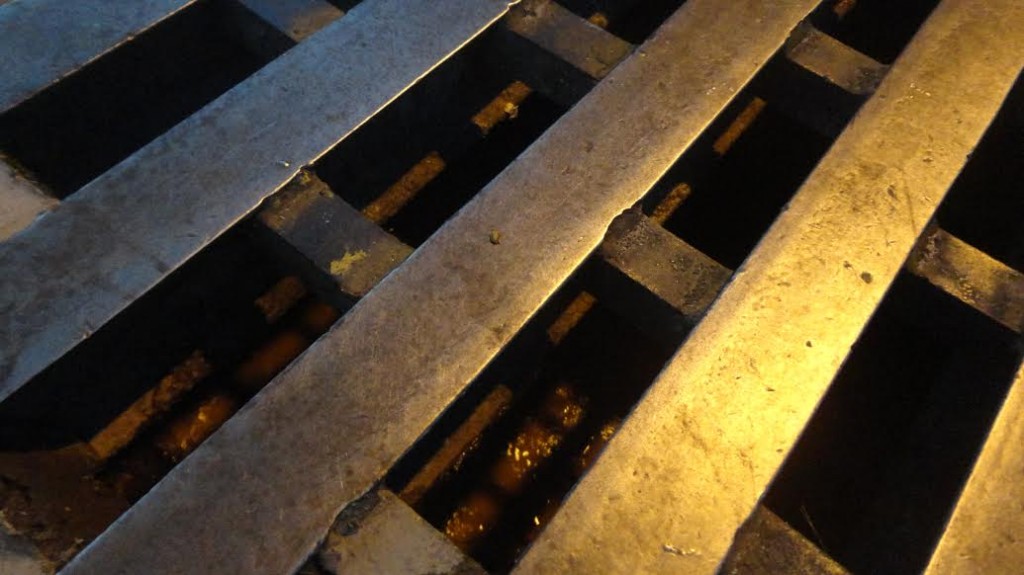 Rios enclausurados (Enclosed Rivers) is a poetic and political construction of a sound space created by editing the sounds of various streams and rivers which have been artificially channelled in the city of Belo Horizonte. This Brazilian city has approximately 150 km of streams and rivers, a hidden population channelled into true underground dungeons visible only through exposed iron grids in the street. The sonority of this work reveals the existing dungeons in the city. In them, a prisoner is forgotten, the urban project serving to render him invisible and silent. However, when you get close to the grids you soon realize the power and sublimity arising from the idea that, at any time, the river can, with all its strength, break free and decide its own course. It was my first year in Belo Horizonte and, having been influence by the theory of derive, I was taken, one day, by the a sound coming from underground which I heard while walking down one of the central streets. I approached a fence that was in the street and was surprised by what I saw and heard. After that I started paying attention and realized that the whole city had the same type of grids scattered along the street. When I started recording the sounds of the river I positioned the recorder between the bars in the grid – I usually did this alone, and some streets were dangerous. Then in 2012, I started recording with Fernando Ancil, a visual artist friend and we created a sound installation along Avenida Afonso Pena, one of the city’s major thoroughfares. In this installation we created an aerial river using more than 40 speakers arranged at intervals of 350 meters up and down the avenue. The idea was to create an acoustic overflow so as to enable the city to once again hear the river. In Rios enclausurados, released in 2015 by Seminal Records, I composed two tracks from edits obtained from several rivers and streams recorded. I think the pieces do not allow for distraction whilst listening. Move the normative sense of the music so as to interrogate, in an interventionist mode, a way of listening to the city. The tracks carry with them a way of doing and a form of sound audibility which has been divorced from everyday living in the city.

Marco Scarassatti (1971) Sound artist and composer, undertakes research and building sculptures, installations and sound emblems. He is a professor at the Federal University of Minas Gerais – UFMG.
Participated with musical pieces and performances of the following festivals: ISIM Conference (EUA, 2007), 3ª Bienal Patagônica (2007), Encuentro de Arte Sonoro Tsonami (Chile, 2007) Buenos Aires 2009 e 2011, Festival Zeppelin 2008 (Espanha), Encontro de Música Improvisada de Atouguia da Baleia, o MIA (Portugal 2013 and 2014). Created and participated in Stracs Harampálaga group, which was dedicated to sound interventions in public spaces,Olhocaligari, poetry and experimental music and the Sonax Group, with which carries out work to date. With this group recorded by the European label Creative Sources Recordings cd Sonax (2008). Master in Multimedia and Doctor of Education has published articles in the areas of Soundtrack, Music Education and Curator of Contemporary Music. Curator of the exhibition Paisagens Plásticas Sonoras (2005) and the First Meeting of Improvised Music, held at Unicamp in December 2007 and creator of Encontro de Costas, meeting with Portuguese and brasilian experimental musicians. He is the author of the CD’s Novelo Elétrico (Electric Clew, Creative Sources Recordings, 2014) and Rios Enclausurados (Cloistered Rivers, Seminal Records, 2015) and he is the author of the book Walter Smetak, the alchemist of sounds, publisher Perspective / SESC (2008).
This entry was posted in #35 and tagged Rádio Zero. Bookmark the permalink.