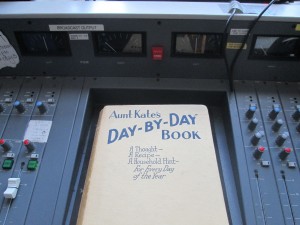 I woke up with a sense of dread. I had forgotten to do something important. What could it be?

One of those things that springs into my mind at inopportune moments, when I can’t do anything about it, or even write it down. Something that I had suddenly, and with panic, remembered this way many times over the last month, but failed to do anything about.

Oh yes, the radia show. We should have made one and we have left it too late. Think of all the poor artists, who would love, love, love to make a show for radia – I only needed to ask someone, when there was still enough time. Now, what to do? I should email the list with some inane and dishonest comment, like ‘Yes, we’re nearly there, just getting the jingles on…’ Then I fell asleep again, and forgot all about it.

The next day, at our studio: I came in while Alex was interviewing Heather on his show. Heather had brought her ukulele and was singing ‘spirit songs’ she had ‘received’. She asked me how old I was, I said I was born in 1973. Heather – Oh, you are a couple of years younger than me and Alex. You are going through your midlife crisis. (I don’t think I am.)

They were talking (on air) about Disneyland Paris. Alex said he had been there once as it was the location of a Buddhist meditation festival he attended.

I had Aunt Kate’s Day-By-Day book with me – A Thought, A Recipe, A Household Hint, for every day of the year. (1937). My plan was to read this out loud, play a few musical instruments, and loop the whole thing back through our webstream. When I got home later on, I said – that’ll have to do. I’ll edit some of my show and use it as our radia show.

If I were to attempt to artistically justify this piece of audio, I would argue that by looping Aunt Kate’s disgusting recipes (‘sweet omelette’, ‘skate salad’) and her cheery words, originally written for and marketed at young women trying to create homes for their husbands and children, we can fully explore the irritating, nagging and incessant voice that tells us all to be better people, cook worse food and remove stains from leather chairs. Also, that the rather random and destructive process of continually looping through the webstream, compressing the signal again and again, sometimes produces rather nice results.

Community radio station for the Totnes area of Devon, UK since 2006. A place to listen, play and experiment.
View all posts by Soundart →
This entry was posted in #35 and tagged Soundart Radio. Bookmark the permalink.