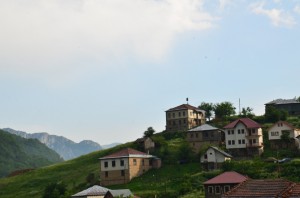 This is a story about mountain village Lazaropole, Western Macedonia, village that is at 1350 masl as one of the highest settlements in the country. Incredible and beautiful place that is located on the plateau of Mount Bistra, surrounded by beech and oak forests. It is a very important spot for Macedonian history with lots of cultural heritage. Now the village is abandoned and theres no permanent residents there aside of the successors of the people that lived there coming for the weekend, occasional excursionists or hikers.
This piece is dedicated to this village and its history, also its sound and the natural beauty; actually it is an audio documentary that includes whole process of exploring about the history of the village. The piece includes sounds recorded in the surrounding of the village, peaks, forest, churches. There are also interviews with authors that were writing books about the village or  its history. Also Emili Slavkovska was singing in the 4 churches placed at 4 different sides of the village. Her voice is enriched with the natural reverb of the churches and its space. The poetry by Jovan Lambeski from his book of songs dedicated for the village was also read in the old central church of the village.
Recently a group of young people started a series of creative weekends there in order to bring alternative culture and young people there, so already for a year lots of creative young people are doing workshops and performances there. The next one is a project about field recordings and soundscape where a group of artists were doing recordings and performing sessions in this beautiful place immersed in the inexhaustible source of sounds isolated from the hustle and noise of the city and the chaos of urban life. Part of this beauty and history we I am trying to capture and transfer here.

This entry was posted in #31 and tagged Kanal 103. Bookmark the permalink.