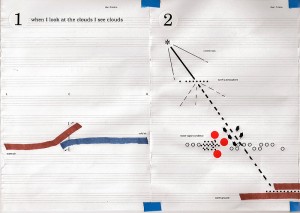 (rehearsal for the When I Look at the Clouds I See Clouds [nimbostratus] performance that took place at Galeria Boavista, Lisbon, 28th Dec. 2012)

Taking as a starting point the intention of deconstructing the video [a cut through the] archive of destruction, this performance combines real time sound improvisation with a random video projection.

Elements of the video [a cut through the] archive of destruction were reduced to small segments which were divided into text and image video clips, to be played randomly from two separate sources projected on top of each other, and thus superimposing text on the video images. This way, the relation text/image is determined by pure chance, destroying not only the line of thought that presided at the narrative structure of the original video – with its calculated collages, sequences and juxtapositions of image-sound-text of different
proveniences – but also originating new and unpredictable image-text relations.

The sound of the original video segments was also split into small segments and loops, being subsequently reworked and transformed live during the performance. As images succeed each other in the projection, the performers try to respond to the random image-text combinations, through improvisation.
–
[a cut through the] archive of destruction is a video, of variable duration, that is part of the Educational Service of the archive of destruction, and consists of collage and editing of diverse materials which can be found in its collection. Through subjective associative lines, it performs a cut, in the geological sense, through some of the main ideas contained in the archive.
The video has been presented as part of installations of the archive of destruction and in a similar way to the archive, it develops in a process of continuous change and re-editing, never having the same cut of the video been presented twice.
–
The archive of destruction is an evolving structure, with no fixed address, dedicated to the collection of documents on actions and ideas that represent a negation of its basic function, which is the preservation of memory.
The archive has been developing in a continuous and organic way, in a movement of expansion that stretches to the most diverse areas – within well defined guidelines – where ideas or actions of destruction can be found.

This entry was posted in #31 and tagged Rádio Zero. Bookmark the permalink.