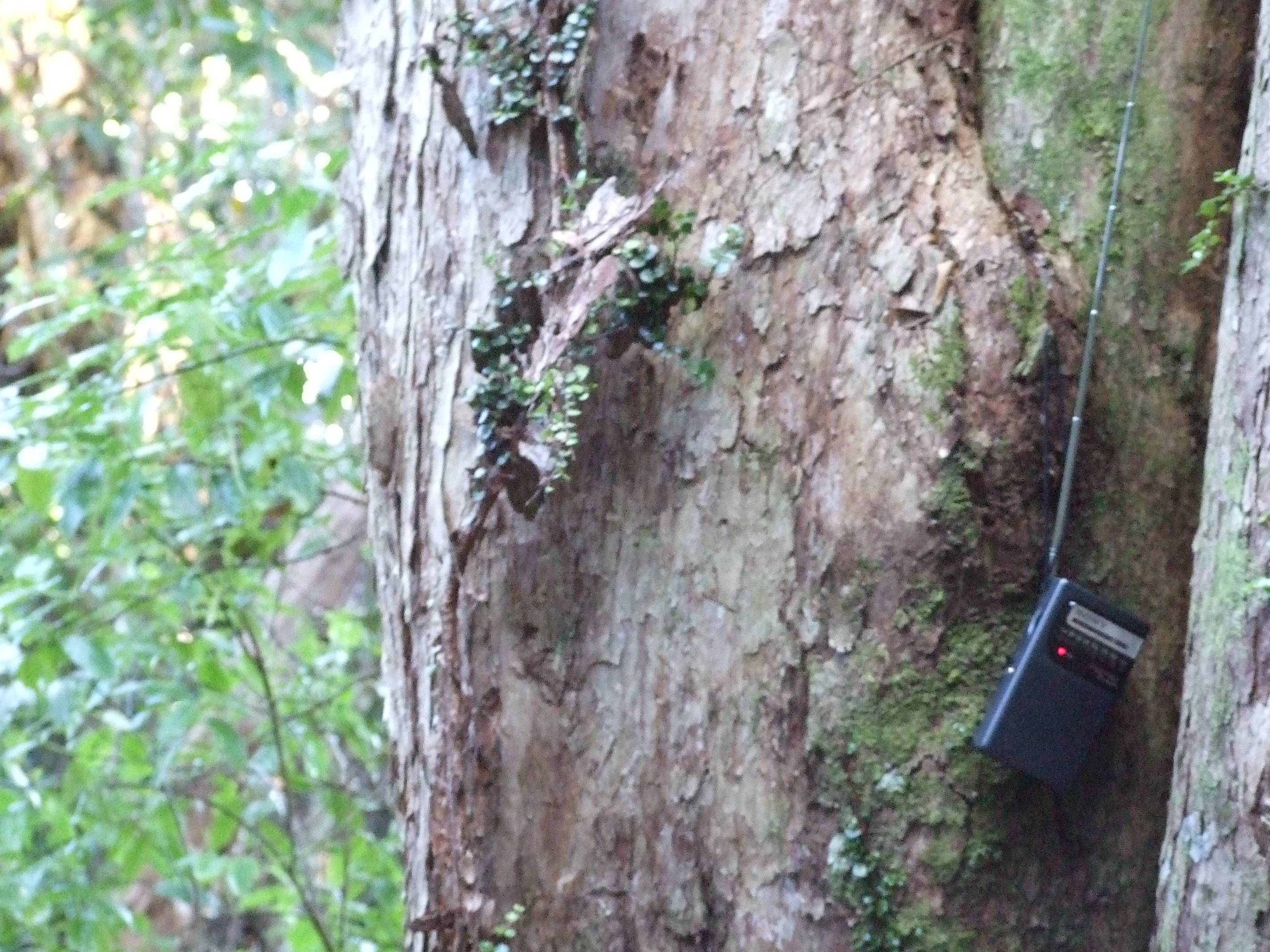 Small, distributed in trees, in hollow logs and on the ground, a flock of radio receivers inhabits a forest area near a large native Rata tree on Kapiti, an island off the coast of the lower North Island of Aotearoa/New Zealand. Slowly, the radios enter the soundscape of the surrounding biosphere, chime in with birdsong captured in field recordings, gathered in the same area on previous days, making audible the signal from a small-radius mini FM transmitter. Down the mountain, a young male Kokako has been calling for the last three months, unsuccessfully trying to attract a mate. The main thing he has been able to attract are the attentions of other, more common endemic forest birds, Tui and Bellbirds, who, being skilled mimics, have started to imitate his calls. Perhaps in response to such unwanted attentions, he has not been heard for the past week, but the radio remembers him, playing back his song in an evocation of both the long history of human vocalisation of birds in this place, and the birds’ own complex mimicry of each other.

Rarely heard but even more rarely seen in the wild, the Kokako, a shy inhabitant of deep forest, and one of New Zealand’s most endangered birds, whose calls have been described variously as “flute-like, organ-like, bell like, sweet, plaintive, haunting and ventriloquial”, has lived on this island since 1991, when thirty three birds were transferred from three remnant populations elsewhere in the North Island. These populations, artificially lodged together into a new environment, yet all sourced from different localities and having their own dialects, originally didn’t recognise each other as the same species, and so breeding was, understandably, unsuccessful. In the ensuing decades, it seems, the development of a ‘Kapiti dialect’ has emerged on the island, and the birds have begun to converse, and to breed, and become tentatively established locally. The South Island subspecies of the Kokako has been declared extinct, and until recently the North Island variant was declining toward the same fate, but in the last few years, due to such placement on offshore predator-free islands, the birds have become one of the recent success stories of New Zealand conservation species management.

A document of a single take performance with no human listeners, beginning and ending as an unadulterated recording of the sounds of the locale in which it was enacted, this mini FM transmission subtly weaves various other recordings from the same location at other times of day into the extant soundscape, a collected sound library begun with the very early morning chorus and progressing toward midday, the time when the piece was transmitted. Shifting sound tonalities are heard, these are entirely due to the aforementioned ‘flock’ of radios and how they are positioned in relation to the stereo microphones used to record the piece. Static is heard when the radios leave this radius of transmission, the territory of the signal marking its place in the forest with song, shards of noise signifying its breach, echoing its placement on an island in a biosecure, highly managed environment forever on the lookout for tears in the fabric, and also birdsong itself as a highly territorialised marker of location and identity. The chiming dawn chorus of bellbirds at the piece’s apex thins out to eventually become a duet of call and response in real time between a live Kokako, attracted by the transmission, and the radios switching off and on as they transmit the song of the same bird, a disjunctive ventriloquistic mediated discourse, not without its own poetry, bird and radio calling to each other for an extended moment over the thick native tree wooded valley.

radio d’oiseaux (kokako variations), through its fabric of forgetting and remembering, of dialect and localisation, ponders the hope for an environmentally aware media that doesn’t approach environment from the perspective of the covetous collector or become a mere one-way conduit for the human ear, but leaves the sounds where they are, taking the advice of the New Zealand environmental care code: Toitu te whenua (leave the land undisturbed), at the same time risking an indulgence of the radio’s secret fantasies of interspecies communication, of not only being a sender but also a receiver, of joining in with the chorus and listening to its localised specificity, of being part of the living soundscape rather than merely part of its museum.

this live transmission was made into the bush at Rangatira on Kapiti Island, beginning at 12:20pm on Thursday the 21st May 2012.

Radio Cegeste 104.5 FM is a mini FM radio station hosted as a platform for radio art by Sally Ann McIntyre. Its projects and programmes cohere around a loose set of circumstances and proclivities, including site-specificity, nomadism, the collection of sound libraries, phonography, museology, memory, the haunted materiality of absent presence, old buildings and other historic sites, psychogeography, the performative fragility of small-scale transmission, bird migration and electromagnetism, the complex idea of ‘dead air’, the recorded and transmitted history of birdsong (sometimes also as a sonification of a New Zealand nationalism), and the possibility of an ecology of the radio that doesn’t represent unstable systems as functioning in eternal homeostasis. Her current residency on Kapiti Island, during which she is conducting research into the soundscape and investigating the potential for radio art as a form of fieldwork, is sponsored by the New Zealand Department of Conservation and Creative New Zealand, in association with the Kaitiaki o Kapiti Trust.

This entry was posted in #28 and tagged Radio One 91 FM. Bookmark the permalink.