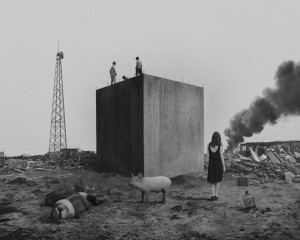 Thomas Turine is a composer, a musician and a sound artist. He has created and is leading the Cosipie Ensemble which gathers musicians, singers and actors. They work together on his contemporary musical compositions and his musical theatre pieces (“88 Constellations“).

He also works with artists from performing arts, plastic arts and auteur cinema. He started off his musical journey as a child with folk music, then he discovered new wave music (LVDCR), rock music (Major Deluxe 2001-2009), acid-house and electronic music (Sitoid 1996-:::).

Since 2002, he’s been closely working with stagedirectors, movie makers and choreographers who are interested in exploring contemporary forms and making new creations. He both composes the music pieces and designs audio spaces. He has created the electro-acoustic sound system for about 60 pieces. He invents his own instrumental composition process, either on computers or on paper. He turns his composition into something more plastic. He likes to take on a visual representation of the world and creates a new one. His work on space, both in the matter of his musical composition or the sound spatialisation tends to work itself in a subliminal way so that the perception of his pieces are organic. The body of the listener has to be engaged and engrossed. He intends his music to be a place of encounter with the listener.

In 2013 with acsr, he creates HO, an abstract radio piece based on sounds collected in Iceland. With the acsr too and the ONA, Thomas launched in 2016 the In Ouïe project, a thinking and exchange project on hearing, between blind people, sound practitioners and everyone.

This entry was posted in #38 and tagged Radio Campus. Bookmark the permalink.