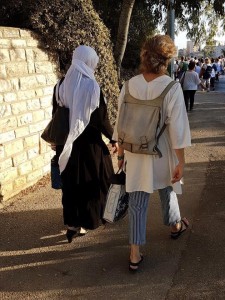 As part of the Women Wage Peace movement in Israel and Palestine, On October 19th 2016 I joined the last day of the March of Hope. We travelled from the Western Galilee to the dead sea where we met our Palestinian partners, then travelled to Jerusalem where we marched to the house of the Prime minister to conclude the march with a final assembly.

At the approach to the street of the Prime Minister’s residence a black barrier was present.

Supported by worldwide solidarity events and the participation of the Liberian peace activist Leymah Gbowee thousands of women marched throughout Israel between October the 4th and October the 19th. The march demanded from the leadership of the state to work with respect and courage towards a solution to the ongoing violent conflict, with the full participation of women in this process. Only an honorable political agreement will secure the future of our children and grandchildren.

Speakers/Singers in order of appearance:

This entry was posted in #37 and tagged radioart106fm KolHaCampus. Bookmark the permalink.