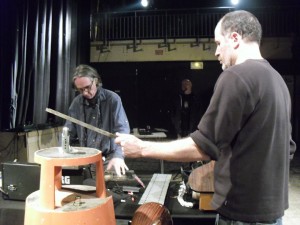 One nice and warm November night, several days before the so called Paris terrorist attack, several streets away where it happened, several artists were recording the 23rd Un-public session at La Générale Nord-Est. Un-public is a project started by Harold Schellinx and Emmanuel Rebus, with intention to invite international artists joining the ad hoc sessions in order to make recordings using almost everything as an instrument and with no audience. This session there was a lots of feedback and sneezing too. And the rest is history…
Participants at the 23rd Un-public were: Dimitrov, Chi, Zhang, Lambeski, Rébus & Har$
Place and date: La Générale Nord-Est, PARIS, 8 NOVEMBER 2015

This entry was posted in #36 and tagged Kanal 103. Bookmark the permalink.