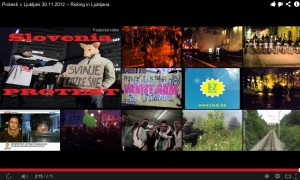 During the closing months of 2012, Slovenia has seen a series of mass popular protests. Thirty thousand demonstrators gathered on November 17 for the first protest, organised by trade unions, students, and organisations of retired people and artists. Dozens of protests followed, large and small, taking place in virtually all of the urban settlements of Slovenia, often organized spontaneously through Facebook and other social media.

This entry was posted in #31 and tagged Radio Student. Bookmark the permalink.