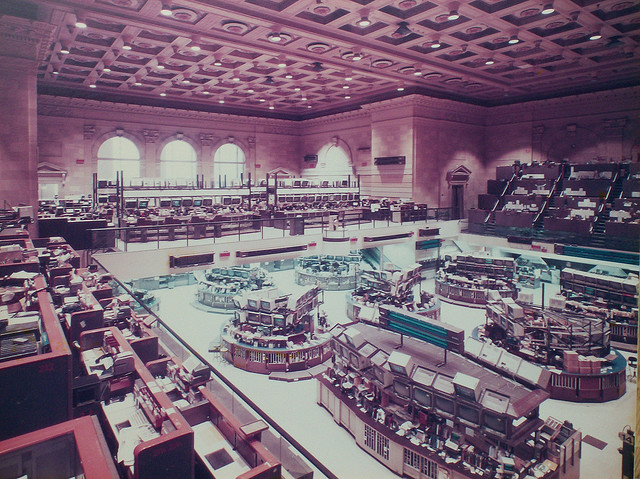 Mark No. 76344794: “the sound of a brass bell tuned to the pitch D, but with an overtone of D-sharp, struck nine times at a brisk tempo, with the final tone allowed to ring until the sound decays naturally. The rhythmic pattern is eight 16th notes and a quarter note; the total duration, from the striking of the first tone to the end of the decay on the final one, is just over 3 seconds.” Owners of Record: NYSE GROUP, INC.

Taking its cues from the long-duration film of the same name, this work takes a 2 second audiomark registered by the New York Stock Exchange and slows it drastically to 28 minutes. The opening bell and energetic trader shouts are brought to a standstill and become instead a dirge of white noise and ringing drones which replace motivation with malaise.

Luke Munn is an interdisciplinary artist based in Berlin with work focusing on sound, new-media and social engagement, using the body and code, objects and performances to activate relationships and responses. His projects have featured in the Kunsten Museum of Modern Art, the Centre de Cultura Contemporània de Barcelona, Electrosmog Festival, Resound Falmouth, and Q-O2 Brussels with commissions from Aotearoa Digital Arts, Creative New Zealand and TERMINAL and performances in Paris, Dublin, Chicago, Berlin, Auckland, and New York.

This entry was posted in #27 and tagged Radio One 91 FM. Bookmark the permalink.