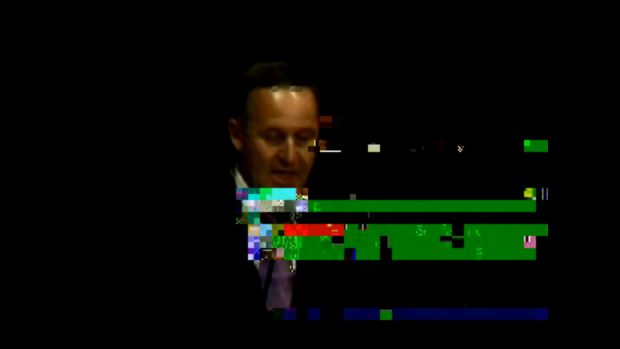 a new sound/media art composition by Matthew Middleton crafted in the lead up to the 2011 New Zealand parliamentary elections, Hearts/Minds explores how media language influences public opinion during election campaigns. Interweaving a haphazard collection of media samples and spoken word excerpts from media commentators, philosophers and political theorists, Hearts/Minds evolves through various loosely delineated movements to evoke the delirium of the mass mediascape’s presentation of the political arena, while simultaneously turning a critical and irreverent ear toward the Western press’s ideological mechanisms. Recalling the subversive media experiments of W S Burroughs and John Oswald’s concept of Plunderphonics, Hearts/Minds can also be heard as something of a meta-commentary on authorship and censorship, an analysis of broadcast radio as a medium historically harnessed to ideological and political purpose, and the role of the news media as politically collusive information moderator, c. 2011. Presenting initially as a crude radio documentary, the piece develops into an acerbic mulch of industrial psychedelia.

a multimedia artist based in Dunedin, New Zealand. Working under the Crude moniker for nearly 15 years, Middleton received modest national recognition with the release of his Inner City Guitar Perspectives album on Flying Nun in 1996. Around the same time he garnered interest in the USA which resulted in the release of Refute a Myth Society on Ecstatic Yod records (a collaboration between Ecstatic Peace and Father Yod records). Riding the U.S. interest, the album My Right To Riches by Middleton’s noise-rock band The Aesthetics was released on Ecstatic Peace in 1998. Around this time he began self-releasing his work via his own Dirtlove imprint, an increasinly prolific publishing project which currently continues as the label Artless Intent.

Middleton received a grant in 2006 to travel to New York City to perform, and it was on his return to New Zealand that he began to explore more seriously the possibilities of installation art and multi-media practice. Middleton’s most recent exhibition, Even More Austerity Measures, at None Gallery, Dunedin, for the week inclusive of July 22–27 2011, explores the relations between current events, political economy and the role of the ‘performer’.

Radio sound and radio art is an occasional but strong motif in Middleton’s recordings, especially the deeply affecting psycho-physical power of short-wave drone. His own show on Radio One 91FM, End Times Jukeboxx, explored the sound worlds of the experimental/electronic/av​ant garde/obscure/eclectic with studio guests and live-to-air performances, and is archived here : http://endtimesjukeboxx.bl​ogspot.com/2011_02_01_arch​ive.html

Middleton’s work can be followed up on his blog La Decennie Brut, or via his homepage. His extensive discography can also be viewed here

creative commons 2011, Matthew Middleton in collaboration with Radio One 91FM and the Radia Network. Commissioned and developed by Sally Ann McIntyre. Text by Matthew Middleton and Sally Ann McIntyre. Many thanks to Creative New Zealand for their support in the commissioning of this work.
NB : the following samples from other media sources were used in this composition :

“•News Values prioritise stories about events that are recent, sudden, unambiguous, predictable, relevant and close (to the relevant culture/class/location)
•Priority is given to stories about the economy, government politics, industry and business, foreign affairs and domestic affairs – -either of conflict or human interest – disasters and sport.
•Priority is given to elite nations (the US, the UK, Europe etc.) and elite people (celebrity).
•News values often involve appeals to dominant ideologies and discources. What is cultural and/or historical will be represented as natural and consensual.
•News stories need to appeal to readers/viewers so they must be commonsensical, entertaining and dramatic(like fiction), and visual. ”
-definition of ‘News Values’, from Communication, Cultural and Media Studies: Key Concepts; John Hartley, Routledge Key Guides, 2002.

“The Ad Hominem, or personal attack, argument is now highly familiar in politics, especially in the use of negative campaign tactics in elections. This form of argument has been studied previously in the argumentation literature, but it has some special features of interest as a mass media argument strategy….it is shown how it has some features comrable to apeals to fear and pity when it is used in mass media as a device of persuasion….it is shown how he or she must use prolepsis by probing into the commitments of the respondent and confirguring them in a certain way prior to the attack. These insights into the multi-agent structure of the ad hominem reveal how the proponent must collect evidence proactively, and then use this evidence to attribute a plan to the respondent. The aim is not just to reveal how to use such a tactic of personal attack in the mass media. The analysis is meant to be helpful to both voters and political campaigners, giving them a better understanding of how to deal with ad hominem arguments by identifying analyzing, and critically evaluating them. The ad hominem argument is not a new phenomenon is american political discourse. A pamphlet was circulated telling of Andrew Jackson’s “youthful indiscretions”. In the 1860’s, Northern newspapers attacked Lincoln’s policies by attacking his character, using the terms “drunk”, “baboon”, “too slow”, “foolish”, and “dishonest”. Steadily on the increase in political argumentation since then, the argumentum ad hominem has been carefull efined as an instrument of “oppo tactics” and “going negative” by the public relations expert who now craft political campaigns at the national level. It has been so prominently used in the major political campaigns, debates, and ads of the past few years that there has even been a reaction against it – a feeling that we have gone too far in this direction and that some kind of restraint is needed. But there has been no evidence of such restraint in the argumentation used in recent campaigns.”
– Media Argumentation: Dialectic, Persuasion and Rhetoric; Douglas Watson, Cambridge University Press, 2007.

“The centre of captalism, the bourgeoisie, is a neutral, unmarked, self-evident centre. Ideology, or at least, the overarching ideology which defines the others, is in the system itself, and precisely this all-encompassing ideological character of capitalism makes its ideological nature and characteristics invisible. They are ‘normal’ and ‘normative’: other ‘ideologies’ are measured against the ideological zero-point, capitalism. The ideological enemy, in Barthes’ view, is thus not liberalism, Gaullism or communism, but ‘l’ennemi capital (la Norme bourgeoise)’ (1957:8), the invisible and self-evident systemic core which we fail to recognise as ideological because it is OUR ideology.”
– Discourse: Key topics in Sociolinguistics; Jan Blommaert, Cambridge University Press, 2005.

“There were individual cases in which the news media appeared to have been decisive , and not simply influential. The role of television appeared to be crucial, for instance, Brazil’s 1989 presidentials contest, when privately owned TV Globo – the fourth largest television network in the world – gave a disproportionate amount of favourable coverage to the conservative candidate Fernando Collor de Mello (De Lima, 1993). According to others, it was the tabloid newpaper The Sun that had won the 1992 British General election for the conservatives, in the evidence of a disproportionately large shift in electoral support amongst its predominantly blue-collar readership (see McKie, 1995). But in spite of such studies, there has been ‘little agreement’ on the nature and extent of media effects, a failure that appears to owe something to the ‘complexity of the processes and the inadequacy of research design and methods’ (McQuail , 2000, pp 416,419) , and the literature is still characterised by a ‘great deal of uncertainty and contradiction’ (Street,2001 p89). Bartels, indeed, goes so far as to describe the current state of research on media effects as ‘one of the most notable embarrasments of modern social science’ “
– Media Effects and Russian Elections , 1999-2000; Stephen White, Sarah Oates & Ian McAllister

The Prime Minister is defending his decision to loan $43 million of taxpayer money to private media companies. John Key claims the loan scheme was designed to help the whole radio industry. But a ONE News investigation has revealed MediaWorks was the big winner after some hard lobbying. Key is known for being media friendly, but he’s facing criticism from Labour that he’s become too cosy with MediaWorks which owns TV3 and half of New Zealand’s radio stations. It has been revealed the government deferred $43 million in radio licensing fees for MediaWorks after some serious lobbying. Key and the former head of MediaWorks, Brent Impey, talked at a TV3 Telethon event. “I just raised it as an issue but we’d been looking at it for sometime. My view was it made sense. It’s a commercial loan, it’s a secured contract,” Key said.It’s believed the loan is being made at 11% interest. But in answer to parliamentary written questions, the Prime Minister said he had “no meetings” with representatives of MediaWorks to discuss the deal. Two days later that answer was corrected, saying he “ran into” Brent Impey at a “social event” in Auckland where the issue was “briefly raised” and he “passed his comments on” to the responsible minister. Labour MP for Hutt South Trevor Mallard said he doesn’t believe the Prime Minister with his first answer,”I mean you have a meeting with a chief executive, it doesn’t matter if it is social, he asks you for money, you get a system going, you remember it,” said Mallard. The government maintains that all radio companies were allowed to delay payments of radio licences and says it’s not a sweetheart deal for MediaWorks. But MediaWorks are the big winners. The total government loan for all nine radio stations is $43.6 million. Of that, MediaWorks were loaned $43.3 million and the other radio stations were loaned $300,000. And official documents obtained by ONE News show a request was made to rush the deal through Cabinet for MediaWorks. The documents said: “An urgent decision is necessary due to financial restructuring decisions facing MediaWorks at the end of October.” Key defends deferring the stations’ licence payments. “Frankly I’d rather see people paying over a longer period of time if it means they stay in business,” said Key. ONE News reported on Thursday night that the $43 million loan was made to MediaWorks despite official advice warning against it. In the documents obtained by ONE News, the Ministry of Economic Development said it “does not see a strong case” for the loan, and warned the deal will “carry a financial risk” for the government. Treasury said the loan would effectively see the government “acting as a bank” and taking on additional risk. Initially Communication and Information Minister Steven Joyce had declined the deal. But then Impey had taken the matter higher, lobbying Key during the Telethon, and eventually Cabinet approval was given. Joyce told ONE News in Thursday’s report that the lobbying didn’t have an impact on the government’s decision.”
– TVNZ One News website, April 8 2011

This entry was posted in #26 and tagged Radio One 91 FM. Bookmark the permalink.