Show 904: tracing the source of the signal only opens the noise of the field (talking to the lyrebird about copyright), by radio cegeste 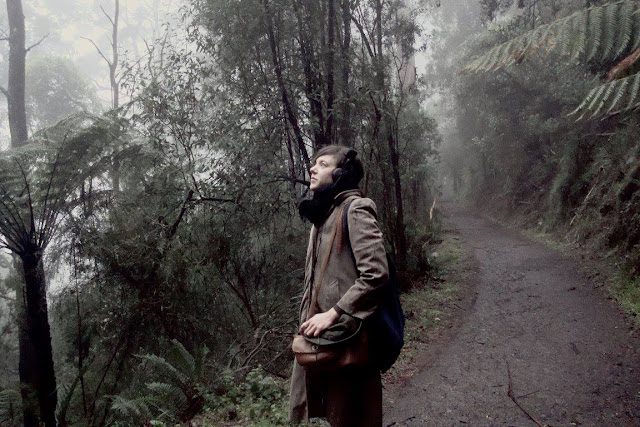 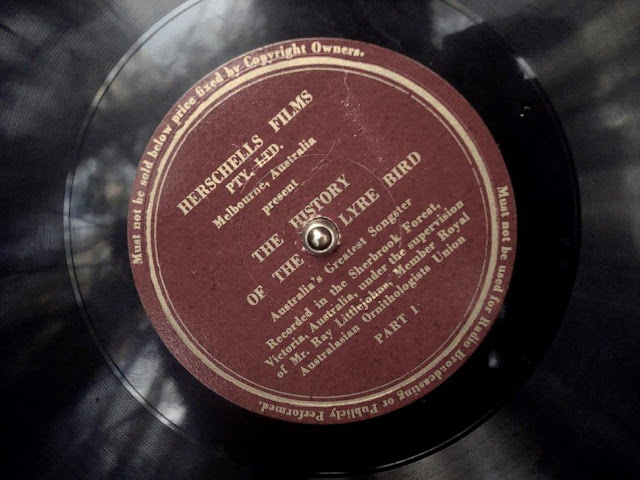 “I cannot gather formal consent from a bird or rock, believe me, I have tried. It remains all too easy for the act of field recording to be deemed inconsequential, for nature and the environment to be treated as a limitless resource. Yet if we are to continue to record and represent lifeworlds beyond ourselves and the environments in which so much change is occurring, we must also consider how such complex entanglements can be unpicked. What concepts and practices are required to examine the animal voice in terms of rights? What happens when we apply a culture of finitude to the soundscape itself?”
– Mark Peter Wright, Listening After Nature: Field Recording, Ecology, Critical Practice.

tracing the source of the signal only opens the noise of the field (talking to the lyrebird about copyright) is a site-specific critical field recording research project conducted as fieldwork by radio cegeste in the location of Sherbrooke Forest, the Dandenong Ranges National Park, in Wurundjeri Country, about an hour out of the city of Naarm/Melbourne, Victoria, Australia.

The project traces critical histories of field recording and their relationship to broadcast via a particular vein of pioneering Australian broadcast and field recording experiments beginning in June 1931, and conducted throughout the 1930s. In this period, the nascent development of Modernist audio transmission and storage technologies became momentarily fascinated with the recording abilities of a particular ancient, local bird species, the Superb Lyrebird Menura novaehollandiae.

In their paper, “First Sound Recordings of the Lyrebird,” Peter J. Fullagar and Ederic S. Slater compile a useful evaluative overview of this history. They describe the first recording (on the optical soundtrack of film) and the first (non-live) transmission: “The first sound recording in Australia of a wild bird was made 28 June 1931. On that day the song of the Superb Lyrebird Menura novaehollandiae was preserved on sound-film in Sherbrooke Forest in the Dandenong Ranges, east of Melbourne. Australian Sound Films Ltd. made this historic recording with the assistance of Ray Littlejohns who was at the time completing a film on lyrebirds. The recording was broadcast during the evening of 2 July 1931, from a radio station in Sydney. Until this time all attempts at recording the song of the Superb Lyrebird in the wild had been frustrated by lack of suitable equipment with all previous efforts being of unacceptable quality.”

These field experiments went on, and a subsequent session produced the first Australian commercially available sound objects documenting the vocal abilities of a wild bird: “The recording used in the production of a gramophone record was made on 29 May 1932; repeating the field recording methods used in 1931. This record was issued in late 1932 or possibly not until 1933. Further recordings on sound-film were made in Sherbrooke Forest; one of special interest being a 45 minute recording made in 1934 which was subsequently used in preparing the soundtrack for the film on lyrebirds produced on behalf of the Commonwealth Government by Ray Littlejohns.”

But the 1931 experiments also included live transmissions from the field: “The first direct broadcast of the song of the Superb Lyrebird went to air on Sunday morning 5 July 1931, following some earlier test transmissions in Melbourne. This broadcast, by the Australian Broadcasting Company, was made from Sherbrooke Forest with various telephone and land-line connexions making it possible to relay the signal for simultaneous transmissions out of Melbourne, Sydney and Adelaide radio stations.”

The July 5th transmission also reached further, across Bass Strait to Tasmania: “Reception was hailed as excellent; indeed, reception of this transmitted signal in Tasmania allowed for re-transmission from a radio station in Hobart.” It was also heard live across the dateline: “A short wave overseas transmission of the broadcast on 5 July 1931 was provided by Amalgamated Wireless (A’asia) Ltd. and reception was confirmed, at least, from North America. Broadcasts of Superb Lyrebird song from Sherbrooke Forest were transmitted in 1933 and 1934, including further short-wave overseas transmissions.”

In June 2016, during the depths of winter (which is Lyrebird breeding season), I traveled to the Sherbrooke forest on an initial field trip to conduct the first of a series of sonic re-mediations understood as “failed nature documentaries” that critically intervened into the above histories, undergirded by an exercise in investigative biomedia archaeology, researching and recording the site of the 1931 and 1932 recordings and broadcasts of the first wild bird to be captured by sound recording in Australian media history.

I took with me on this trip an ‘original copy’ (contradiction intended) of the 1932 gramophone record (from my own collection), which was one tangible object that emerged from these initial early twentieth-century collisions of site, species, mediated listening, and technological invention, as well as a gramophone player on which to play back this record to the (presumed – Lyrebirds are extremely territorial, and don’t roam far, a fact reflected in the culturally-transmitted content of their sonic repertoire over generations) descendants of the single Lyrebird captured on it. In this exercise I was assisted by members of the Sherbrooke Lyrebird Survey Group in (approximately) identifying sites, and while in the area I also joined their dawn survey session the next day, and recorded the sounds of these dedicated citizen scientists in their work, as well as the dawn chorus of Lyrebirds in the forest.

The 1932 record, recorded on the 29 May and released later that year or early the year after, is credited to “Herschells Pty Ltd. Sound Picture Producers Melbourne, recorded in the Sherbrooke Forest, Victoria, Australia under the supervision of Mr. Ray Littlejohns, member of Royal Australasian Ornithologists Union. Dialogue by Mr. Alfred L. Samuel.”

From the first pressing of the record’s original wrapper (beautifully illustrated with a drawing of a lyrebird), we can read a description of the bird it presents to home listeners, far from the Dandenong forests: “His mimicry is almost uncanny and in addition to his wonderful repertoire you will hear above the roar of the wind in the forest, perfect imitations of – the Butcher Bird, the Kookaburra, the Australian Thrush, the Whip Bird, the chuckle of a flock of Crimson Parrots, the Pilot bird, the Black Cockatoo, the Honeyeater… You will also distinguish what appears to sound like a man hammering a fence, a water pump in action, a Dog barking the warning cry of a White Cockatoo, the chuckle of a domestic Fowl and a man whistling for his Dog.”

Side A of this recording is a voiceover narrative, which functions to construct a setting of romantic wilderness, a framework into which a recording of a single lyrebird is placed, a “wild Australia” in contrast to the home listener’s position in their domestic sitting room: “Don’t forget that what you are about to hear”, the male voiceover says, is “a bird singing its own wild song,” with “the nearest human being almost a quarter of a mile away.”

Side B of this recording comprises a demonstrative cataloguing of examples of the lyrebird’s mimicry. The record’s narrator, in introducing each of these in systematic fashion, describes the lyrebird as “Australia’s greatest mocking bird”

The record is copyrighted as follows: “Melbourne: Herschells Pty Ltd, 1932. Recorded in the Sherbrooke Forest, Victoria, Australia, under the supervision of Mr. Ray Littlejohns. Must not be sold below price fixed by Copyright Owners. Must not be used for Radio Broadcasting or Publicly performed.”

No-one apparently asked the Lyrebirds whether they had given copyright clearance for their sounds. I thought it would be interesting, in the service of a critical field recording practice attuned to the ethical implications of sonic collection and in deference to the Lyrebirds themselves as superior sound recordists, to take it back to the forest to see what they had to say about this. 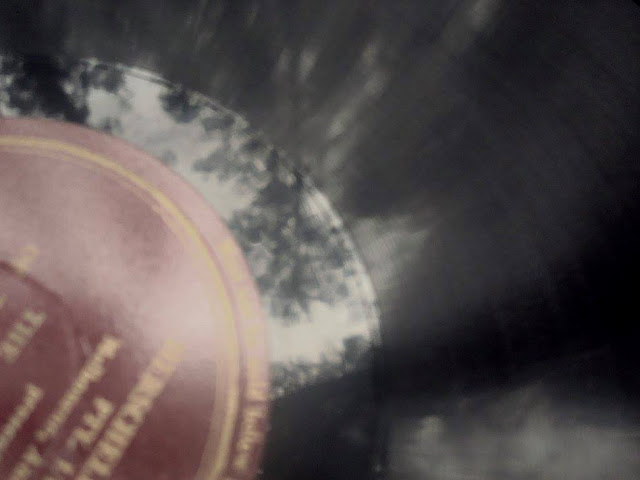 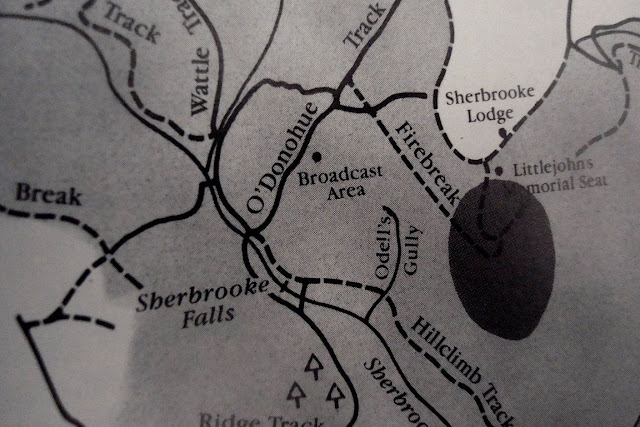 In the re-recording I made on this initial field trip, the 78rpm record was taken back to the place where it was recorded (as closely identified as I could manage, with the help of several books and the local knowledge of citizen-scientist and Dandenong Ranges resident, Jan Incoll) and played to this site over 70 years later, to produce a new series of residues of its playing to living Lyrebirds (a demonstrative playback conducted without human listeners apart from myself), who are presumed to be direct descendants of the historically recorded bird.

Listening back to the recording I made that day, the calls of various distant and close Lyrebirds in the present time of the 2016 recording echo that of the 1932 bird, their long-dead ancestor on the shellac record “singing its own wild song,” but they also overspill the record’s narrative framing and the limited capture and playback technology of the early twentieth-century. They emerge with startling clarity, to answer, to speak back, to include their own mimic-voices in the re-recording, and to perhaps reinvent the one-way exploitative tendencies of field recording practice itself, looping back time, listening and ancestry. Maybe, given their own incredible skills as “nature’s tape recorders,” they might even choose to one day include the recorded voice of their ancestor, filtered through human listening and the artifactual and temporal constraints of recording media, in their own future transmission (broadcast/reception) space.

Re-listening to this mise-en-scene within this half-hour composition, the Lyrebirds can be heard (as in a series of folk “rounds”), to “mock” the plummy British-inflected radio voice of the 78rpm record’s narrator as he praises them for their mocking-bird abilities, and to exceed his efforts to systematically set out each incidence of mimicry as an audio catalogue, frozen in time, in turn spilling over the three-minute time limit of a 78rpm record, to sing for the duration of the half-hour radia piece. The collision of the two timeframes – 1932 and 2016 – destabilises both the constructed soundscape and the integrity of the record, and the integrity of the location/field recording on-site. All the sounds for this experimental documentary were recorded on-site. Other sounds include wind in the trees, human voices (of passing tourists), rain and other species of birds, and myself, whispering a repetition of the voice-over narrative of the record within the forest site in earshot of living Lyrebirds, half lo-fi David Attenborough, half Australian Gothic, wrangling field recording and gramophone equipment by myself in the torrential rain, covered in leeches, almost a century later. This is layered with some audio of the volunteers from the Sherbrooke Lyrebird Survey Group finishing their annual dawn count. The Lyrebirds, however – their ancient culture positioned at the very beginning of the emergence of passerines – have the last (untranslatable) word.

Many thanks to Jan Incoll (a.k.a “The Lyrebird Lady”) and all involved with the Sherbrooke Lyrebird Survey Group for the dawn cups of billy tea, the companionship, and the tolerance of microphones.
This project was partially developed while an artistic fellow at the State Library Victoria 2018-19.
It was conducted on the lands of the Wurundjeri people (Woi-wurrung language group), who are the Traditional Custodians of Melbourne and surrounding lands. In creating this work I pay my respects to all indigenous elders, past present and emerging, and acknowledge that sovereignty has never been ceded. 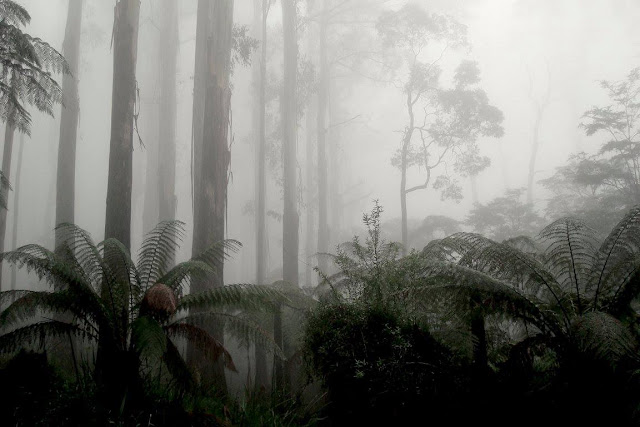 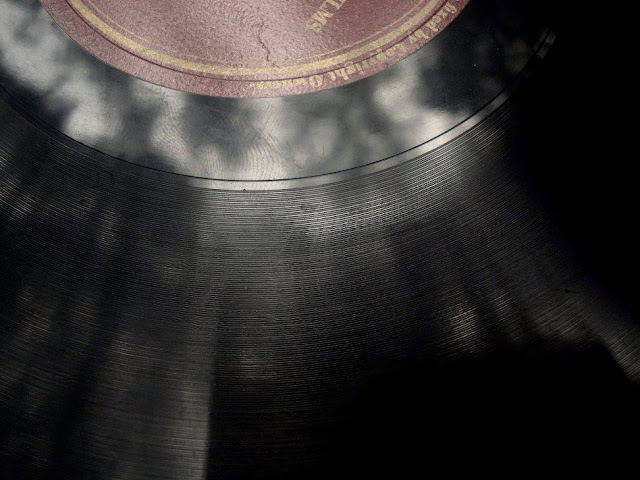 This entry was posted in #48 and tagged Radio cegeste, Radio One 91 FM. Bookmark the permalink.