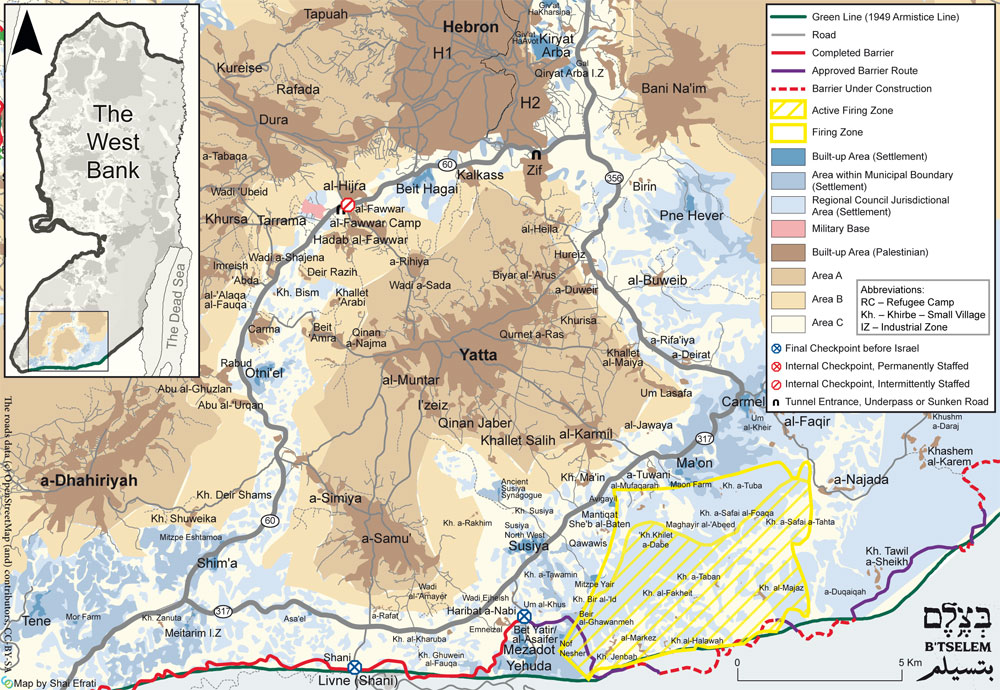 On 4 May 2022, the Israeli Supreme Court approved the forcible transfer of more than 2,200 Palestinian residents of Masafer Yatta (South Hebron Hills) after the military declared their area of residence as “Firing Zone 918.” In handing down this judgment, the court permitted the state to commit a war crime.

“I am Wazha Ayub Abu Sabha, 60 years old. We have been living on this land since I was born, and I got married and had a baby, and I had grandchildren and brides in law, all this land. And my husband, rest his soul,  got a cardiac arrest because he was here and did not agree to go home, then he got a cardiac arrest in the evening after he came home and we milked the goats, then he got a cardiac arrest and we called the car that came to pick us up, we returned home and he died. And we did not move from here. We built houses and wanted to rest and then they came and demolished our houses, 5 rooms, and a room on the second floor where my son wanted to entertain friends and another room that served as a warehouse, and a shed. On the first time they demolished everything. Then there were people who brought us houses and helped us, we rebuilt the houses. And we also set up a pigeon nest, a kitchen and other rooms. We were offered to move away from where we were the first time, that’s what we did but they demolished everything at once. They came the second time and destroyed everything at once the rooms and the kitchen and everything. On the third time [demolition], people helped us to set up tents. Two tents. Then suddenly in the middle of the day without any warning we saw tanks coming towards us. They moved the tents again and even the pipes – destroyed and removed from the place also a tree that was in the place. They uprooted it.

Then they destroyed everything. The legume warehouse, they took out the food for the sheep using a crane, and using a knife they opened all the food bags and covered them with earth. where shall we go? What shall we do? We sat here in the sun until they brought us the keys to the clinic where we are sitting now. The lambs and sheep were not saved either, they were also harassed. They took them out of their sheds, the lamb that gave birth, died in the morning, and our losses… we do not know how much …. And now we are in this heat, who can sit under this scorching sun?

This is our land and this is our homeland. Where shall we go? We have no other place, can’t leave and don’t want to leave.”

This entry was posted in Uncategorized. Bookmark the permalink.