Show 887: “KINsequences, a sculpture that wants to get made”, by Writers Kin – Soundart Radio, Devon, UK 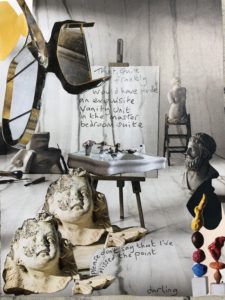 KINsequences is a collaborative piece of writing by Molly Allam, Sovay Berriman, Alan Braidford, Tara Casey, Rachael Coward, Joanne Dorothea-Smith, Claire Gladstone, Tina Kutter, Clementine Neild & Frances Staniforth. The text has been built by each participant writing in response to the person that has preceded them. It is both in the Surrealist tradition and a version of the parlour game known as ‘consequences’. Each writer can only see the previous participant’s contribution, with the whole only being revealed at the end. The text contains enough common threads to form a narrative arc but travels in unanticipated directions and represents a chorus of voices, both visually and through language. There are three acts; Act I: A Sculpture That Wants To Get Made, Act II: The Making, and Act III: The Viewing.

Writers’ KIN is a group of artists who regularly meet through CAMP, a member led support and professional development network for artists, curators, producers and arts writers living in Devon and Cornwall.
A group reading of KINsequences was performed from this co-created and illustrated text, recorded and produced by Shelley Hodgson at Soundart Radio.

Community radio station for the Totnes area of Devon, UK since 2006. A place to listen, play and experiment.
View all posts by Soundart →
This entry was posted in #48 and tagged Soundart Radio. Bookmark the permalink.