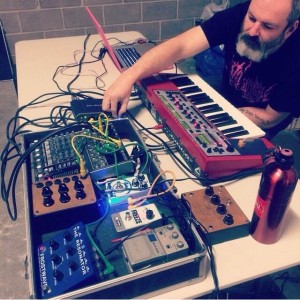 “(T)HERE” is one of a series of works I have made mediating electronic and acoustic sound to create imaginary spaces that nonetheless refer to an actual place. At the back of my garden there is a wall that at night reflects sound coming from the rubbish disposal operation centre some kilometres away. This piece is made entirely (with the exception of the two drones that come to prominence in the second half) from recordings made on the walk from my back room where I worked on it all the way down to the rubbish centre: traffic sounds, trucks loading, beeps and alarms, birdsong from blackbirds and currawongs, rain and insect sounds, reflected echoes from a distance etc. Many sounds are heavily granulated and pulverised to become abstracted noises with something of the original timbre preserved. The high pitched “strings” are concrete sounds put through filters tuned to the pitches present in the song of the blackbird. The basic pitches of the two drones in the piece are tuned to the birdsong as well. The basic idea of this and other environmentally derived works like it is to present and simultaneously disrupt this “tuning of the world”.

Keith W Clancy is a Melbourne-based composer, sound, video and installation artist. He currently studies sound at RMIT and was trained primarily in philosophy and fine arts some time late last century. His most recent work was “Corrective Services” for computer controlled organ and electronics performed on the grand organ of the Melbourne Town Hall (https://soundcloud.com/keith-w-clancy/corrective-services-for-organ-and-electronics-live-recording). He also performs and records long-form drone works under the name Wolftöne (https://wolftoene.bandcamp.com/).

This entry was posted in #37 and tagged Eastside FM. Bookmark the permalink.