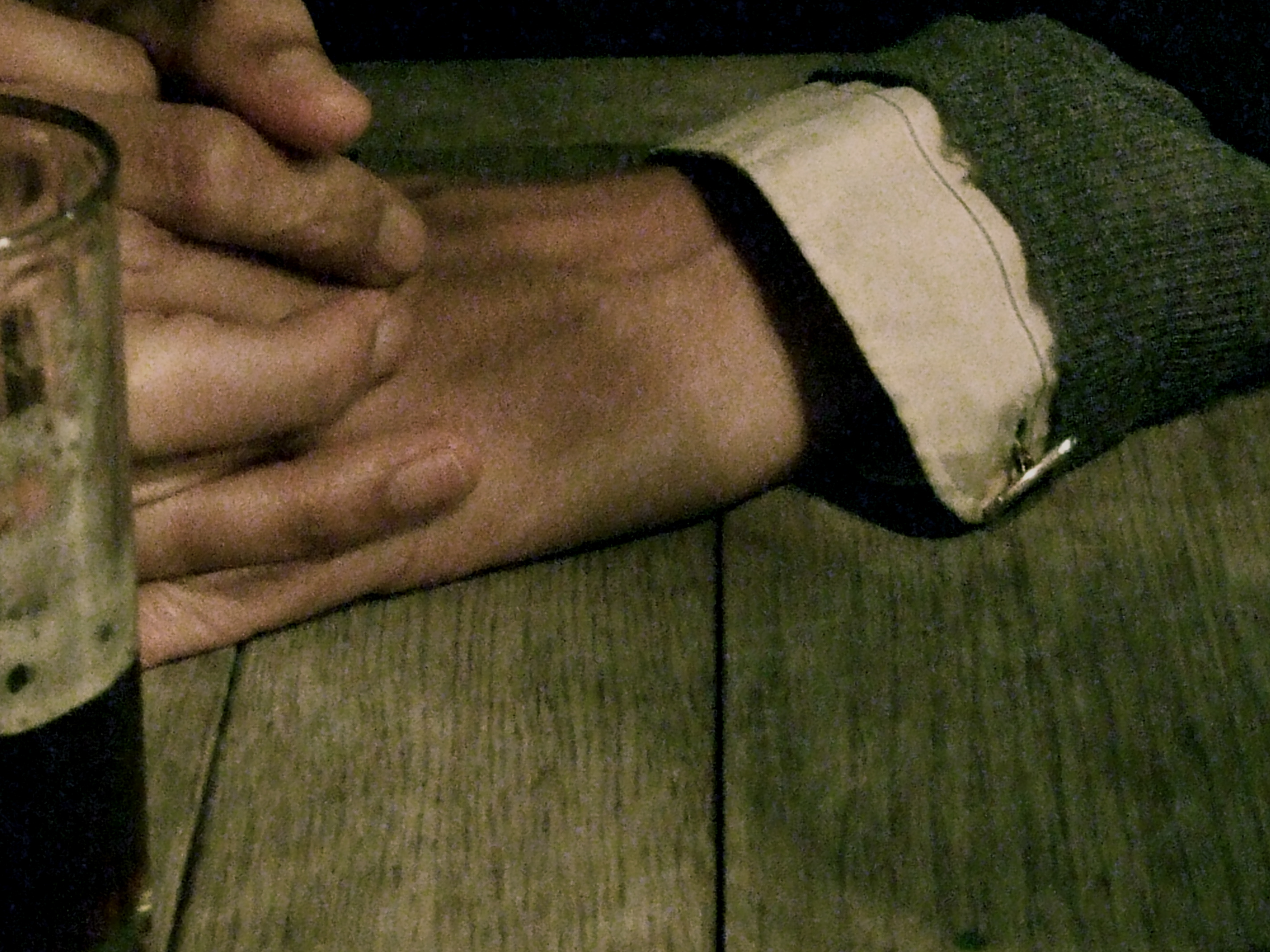 “In late-modern times, we experience a growing pollution of air, water, and food… But there is another kind of pollution which concerns the psychic breathing of individual and collective organisms. Semiotic flows which are spread in the infosphere by the media system are polluting the psychosphere and provoking disharmony in the breathing of singularities: fear, anxiety, panic, and depression are the pathological symptoms of this kind of pollution.” – Franco “Bifo” Berardi, ‘The Uprising: On Poetry and Finance’.

“In the year 1930, John Maynard Keynes predicted that, by century’s end, technology would have advanced sufficiently that countries like Great Britain or the United States would have achieved a 15-hour work week. There’s every reason to believe he was right. In technological terms, we are quite capable of this. And yet it didn’t happen. Instead, technology has been marshaled, if anything, to figure out ways to make us all work more. In order to achieve this, jobs have had to be created that are, effectively, pointless. Huge swathes of people, in Europe and North America in particular, spend their entire working lives performing tasks they secretly believe do not really need to be performed. The moral and spiritual damage that comes from this situation is profound. It is a scar across our collective soul. Yet virtually no one talks about it.” – David Graeber, ‘On the Phenomenon of Bullshit Jobs’.

Played again and again on an inscrutable loop inside one’s head, the earworm serves two roles. It is both the residue left by the passing tidal flow of a corrosive popular culture that has, in currency terms, long since departed, as well as an important indicator of the way in which meaning, in both narrative and communication terms, can be eroded and lost through misapplication. Til we drive away the pernicious echoes of the unwelcome earworm, we are subject to this effect. My project here is an attempt to break down and dissolve an earworm by isolating its constituent parts from its whole. Fingers can no longer tap to a pithily banal beat, the pointless nostalgia painted by MOR 80s as Reaganite false history, can neither infect nor madden in the same way. Bled dry of all supposed nostalgia into a seemingly pointless repetition, a new set of possibilities and questions can form, freed from an imposed single meaning and allowed to generate nearly infinite new ones. Was there ever anything to the original material besides capitalist ill will, and the desire to destroy multiple rich possibilities of history and replace them with a single line or two? The end result, perhaps, attempts to suggest we can only re-infuse these over-familiar words with new possible meanings once we have scraped away, word by word, the troublesome, undeserved cultural baggage it arrived with.

As 1984 looked back to 1969 and replaced tumultuous political and social change with co-opted nostalgia for a fantasy moment that never occurred outside of popular fiction, so too we can now look back at 1984, not insignificantly the banner moment in New Zealand for the political ideology we call neoliberalism, that continues to dominate our lives now. Neoliberalism’s idea of the past, like that of the colonial powers of a century ago, is that our reading of history must be endlessly flexible to serve the interests of power. Contemporary digital culture in an overclocked society supports this aim, by endlessly abbreviating all parts of our discourse into smaller and smaller bite-sized chunks where meaning collapses away, and where communities are held together by the thinnest skeins of shared non-experiences, carefully targeted around maximum impact for minimum meaning.

Of course our lives are not just fast now. Under neoliberalism, work is a dominant paradox, designed to take as much of our time as possible. As members of societies we are expected to be productive, to “pay our own way,” and to base our lives around work above all else. Increasingly we are judged according to a set of criteria that are not only somewhat abstract and contradictory, but always somewhat out of reach – there is no tangible reason given for this state of affairs beyond the platitudinous and judgmental. But at the same time as we are expected to contribute to society through working, there is a significant lack of meaningful work to be done within this matrix of possibilities. The proletariat work structure had at least a not-insignificant material element: the work done was physically manifest and often its value was apparent to the worker. Since the proletariat has melted away to be replaced by the precariat, and, as Dave Graeber puts it, the “bullshit job” replaces the possibility of life not dominated by a need to work manually, the rhythms and manifestations of how work is imposed upon us have changed.

Where work used to be physically exhausting and based around repetitive economy of action, as dictated through the application of Fordism and Taylorism, contemporary precariat work is more about exhaustion in terms of social interaction, and especially meaningless and unnecessary administrative interaction. Proletariat labour is about exploitation, but precariat labour is beginning to become more simply punishment and control, with the options of success becoming more focused around an almost feudal fealty towards a boss, for instance in a company like Amazon, where workers are expected to give over the entirety of their existence to the company, at the expense of family or life outside of work. As a result the nature of exhaustion is less related to physical exhaustion of the worker and his or her resources, as the exhaustion of any life outside of work.

Similarly the assembly line of endless repetition is replaced by an endlessly repetitive verbal and digital discourse that seeks to close in and restrict the very nature of language. This is done through the increasingly crowded pace of contemporary life, especially with regards to the digital, which has lead to drastically diminished concentration spans, and from that a dramatically reduced duration and complexity of discourse with which we interact.

Duration is obviously key to this: we believe we can no longer spare time for complex concepts, or for knowledge that may be non-utilitarian in nature. Why spend years unpicking the complexities of the late 60s, both in details and perspectives, when a dumb 3-minute song can tell you what you need to know, and why have a memory, when you can look anything else up on a need-to-know basis? But the new worlds have a series of new demands for interaction to replace any space that may have been freed up by the new attention spans, new and aggressively pitched demands for us to attend to volume in volume, and so our lives are now filled up with endless carefully directed noise disguised as messages. So for the contemporary precariat worker, we are now much more likely to be talked to death than to be worked to death, and exhaustion comes as mental overload.

Just as important to the project is scale. As we live in a society increasingly defined as global, and increasingly represented as statistical blocks, and as we increasingly form virtual communities that are only connected through the digital, we are allowing structures to become as big as they possibly can. This is convenient for elites, who can now generalise about statistical flows, but less useful for everyone else who can now be understood as a block or a number, because the large scale of these systems forces an abstract understanding, rather than a human-scaled one.

As with much of its power structure, neoliberalism’s attitude to language is hypocritical, employing different positions between the top down and the bottom up. Knowledge deemed to be private – like the corrupted operation of financial and political systems – is guarded closely through coded language. This language is designed to teeter of the verge of incomprehensibility, but unfortunately the coded becomes corroded as language skills among the elites are not valued as highly as more sociopathic and anti-intellectual tendencies.

Similarly, access to interpretative knowledge is becoming more restricted. Education systems that social democracy worked to make accessible to more people – obviously an unfinished project – through the post-WW2 period are being broken down and linked into obligation structures (like student loans), with the aim of restricting them to the elites. But since these elites are oriented around power and greed rather than knowledge, there will be nobody prepared to commit to these options of learning, so instead the worldwide education systems are being trashed into increasing privatisation and admin-overload.

As a result of these elements, language itself is increasingly contested ground. However, this war is not completely lost yet. Resistance to the language of power is one of the things anyone can do. Simple techniques are still effective. Writing in long sentences, using words that are open to many complex meanings is a better way to show disdain for the imposition of neoliberal power than any “clicktivist” link. Rendering your ideas impermanent and non-definitive, telling them to people in real life and allowing the ideas to shift in response to your community holds back the tide of information autocracy for a few more seconds.

In this case, I am attempting to break down a kind of dominant historical text from one form – words – to another form, that of sound. The sound of the body is the basis of language, something we can tend to forget in our contemporary, so-called “disembodied”, “virtual” worlds. But the sound of discourse or attempted discourse can convey quite different meanings parallel to language, and those messages can even be contrary to the language used. Sound can also obliterate meaning altogether, so in this case, I am hoping to use the sound of repetition – analogous to the use of endlessly repeated political rhetoric by neoliberal power – to break down, over time, the deceitful and false history put forward by conservative popular culture.

Campbell Walker is an underground filmmaker, performer and writer who, as one of a group of c. 1990s experimental artists exploring the nascent possibilities of early hand-held digital video (what became known as the Aro Valley Digital Cinema movement, after the locality of the city of Wellington in which the artists in question all lived), is known for his low budget features exploring intimacy and communication (and the lack of it) in New Zealand culture. With research interests in cinematic duration, improvisation and collaborative structures, and the relationship of film, performance and politics, Walker’s academic interest in post-May 68 French film has seen him recently write on Jacques Rivette’s Out 1, and Jean Eustache’s La Maman et la Putain, while continuing to work within localised grass-roots arts communities in the more southern city of Dunedin (where it is still possible to live the artist-precariat life), combining experimental film work with cultural criticism, event organisation, performance and conceptual poetry. Jacob Edmond recently described Walker’s artist book / sound poetry project The Crime LINKS in the Smoke, a text and performance work constructed from the discarded remnants of detective novels found after a fire in a bookstore, as “an undead work that plays on the print book as both fetishised object and repeatable copy.” This new work for radia similarly explores repetition as a tool, in this case one usable in clarifying neo-liberal langauge as a form of “zombie” aesthetics.

This entry was posted in #35 and tagged Radio One 91 FM. Bookmark the permalink.