Show 527: We Should Take Nothing for Granted! Listening Conditions for an Alert and Knowledgeable Citizenry (Radio Student) 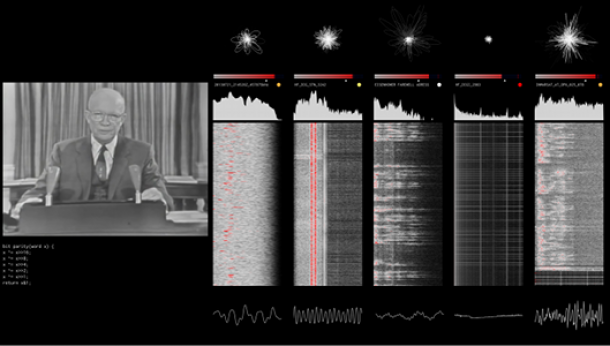 RADIA SHOW 527 BY RADIO STUDENT, LJUBLJANA, SLOVENIA:
“We Should Take Nothing for Granted! Listening Conditions for an Alert and Knowledgeable Citizenry”
by Matthew Biederman, Marko Peljhan, Brian Springer & Aljosa Abrahamsberg

Through the mining of the global radio spectrum for both recognizable voice communications as well as digital communications including encrypted, coded, open and proprietary modes, the work addresses current positions and debates  about the notions and structuring of  privacy, surveillance states, safety and active civic potentials to engage and re-imagine the relationship between the global citizenry and sovereign actors with the military industrial complexes including their visible, opaque and dark structures.
The title is based on Dwight D. Eisenhower’s farewell address of 1961 wherein he warns of the dangers of an unchecked military industrial complex, the extinction of creative free-thinking within higher education, and the extraction of natural resources without consideration for their renewal. The address is extremely relevant today in light of recent revelations of massive surveillance programs, perpetual information and real wars, the reshaping of the university complex and intensified resource extraction. Eisenhower’s speech was not a dark forecast but instead stated that  ‘only an alert and knowledgeable citizenry can compel the proper meshing of the huge industrial and military machinery of defense with our peaceful methods and goals…’ The text serves as the foundation for a set of Systemic activities in the fields of communications security, data aggregation, analysis and display and retransmission. The work reflects on the conditions for the development of ‘an alert and knowledgeable citizenry’ in societal circumstances that, despite constitutional protections, do not warrant them.

Abrahamsberg, Biederman, Peljhan and Springer have been involved in activities dealing with the art and science of radio and telecommunications through the prism of radio art, technical culture, television, film, conceptual art, electronic music, media arts and tactical media since the 1980’s and 1990’s, in projects such as Ladomir-faktura, Makrolab, and Wardenclyffe. They are currently working on ‘Systemic tactical environments’ implementing the meshing of software defined radios, data aggregation, analysis and display.

This entry was posted in #34 and tagged Radio Student. Bookmark the permalink.