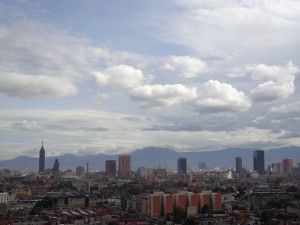 Mexico City: more than 20 millions people gathered making noise!
A noisy city for most; Blume would like to transform it in a sonorous city.
The street sellers make the voices of the polyphonic choir, the small bell from the ice cream seller substitutes the triangle from the orchestra, and the hammering of the protesters on the metallic wall are the percussions.
In Mexico City, people shout to be heard, they shout their rage against the cops, they shout at the ‘lucha libre’ fights, they shout together ¡ Viva Mexico ! to feel united, and during a demonstration they also shout ¡Viva Mexico ! People shout in church, they pray together or alone, whispering in the silent night.
The thunder booms: nobody can shout at the storm, and the rain cleans the silent city.
A solo voice after the rain, and the choir resumes gradually.
People sing to forget and the shouting starts again, louder, so that the others don´t forget. The water flows under the city, the forgotten lake is mourning; it remembers when the city was an Island… On the top, it is too noisy, underneath, the water keeps in silence the secrets of the past.

INTENTION
Most of the people in the world live in cities. The daily soundscape is in most of the case a continuous sound of traffic, close or distant. Mexico City has a series of sounds added to the background which make the specificity of the city:
the cries and sounds of the street sellers are in most part responsible. In the past, most cities had their own cries (as some classical music can testify, like ‘Les cris de Paris’ from Janequin). In Mexico City, this tradition has persisted until today, but the government and general opinion is not in favour of them:
street sellers are each time further away from the touristic center, advertising campaigns are done to make them disappear from the subway, and police operations block their access to the streets. I would like to pay tribute to these Criers through a
soundscape of Mexico City, that will become a sonorous memory of a time that
sooner than later will disappear.

This entry was posted in #33 and tagged Radio Corax. Bookmark the permalink.