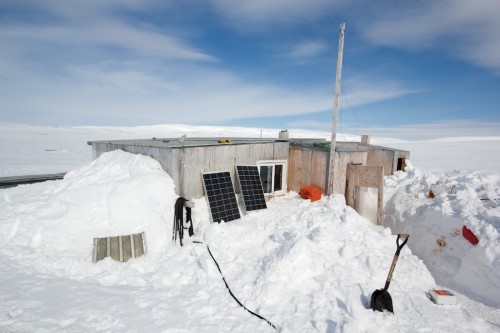 From Radio Student, Ljubljana, in Radia show 406 we bring You a mashap of authentic recordings from the Arctic, made by Marko Peljhan and his team, from one of their Arctic Perspective Initiative’s mission: therein recordings, local radio communications over short waves and folklore and pop music from the Arctic. “In the Arctic, there are the openest public radio stations. The radio station does not have a key, anyone can come on the radio and do the show.” (M.P.)

Marko Peljhan. After theatre and radio studies at the University of Ljubljana, Marko Peljhan founded Projekt Atol, an organisation working with visual arts and communications technologies, in 1992. In 1995 he co-founded LJUDMILA (Ljubljana Digital Media Lab), now one of Europe’s most significant cultural and tactical media labs. In 1997 Peljhan’s ongoing Makrolab, launched at documenta in Germany, provoked artistic and scientific reflection on sustainable technologies and energies. Radio is key to Peljhan’s research: he founded and coordinates the Insular Technologies initiative, which proposed an autonomous high frequency radio network long before wireless internet. Radio underpins performative works such as Solar (1997), Signal-Sever (1999 – 2006) and SPEKTR (2007). Peljhan is Associate Professor of Interdisciplinary Studies, Media Arts and Technology Program, California Nanosystems Institute, University of California, Santa Barbara, USA; he is also a licensed radio operator and trained pilot.

Arctic Perspective Initiative (API) is a non-profit, international group of individuals and organizations, founded by Marko Peljhan and Matthew Biederman, whose goal is to promote the creation of open authoring, communications and dissemination infrastructures for the circumpolar region. Its aim is to work with, learn from, and empower the North and Arctic Peoples through open source technologies and applied education and training. By creating access to these technologies while promoting the creation of shared communications and data networks without costly overheads, continued and sustainable development of autonomous culture, traditional knowledge, science, technology and education opportunities for peoples in the North and Arctic regions is enabled.

Radio Student. Based in Ljubljana, the capital of Slovenia, founded back in 1969 in ex-Yugoslavia, with 24 hours program and more than 200 regular contributors today, Radio Student is one of the oldest and the biggest independent and non-commercial radio stations in Europe, with a long tradition in radio art and the diverse field of contemporary investigative art practices, especially throug Ministry of Experiment project in 90′s and 00′s, and today through our Open radio art theory investigative platform RADAR.

This entry was posted in #29 and tagged Radio Student. Bookmark the permalink.