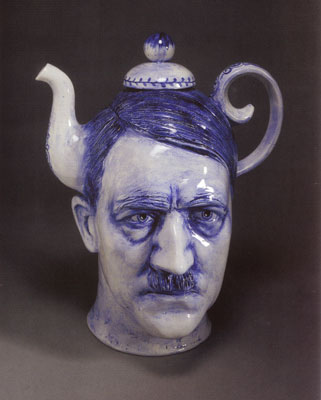 A radio play created by Nikolai Galen (voices) and Dolf Planteijdt (soundwork) at the WORM studio in Rotterdam 29.10-3.11.12 with additional work at the Koeienverhuur Mobile in Amsterdam.
Based on a play text by Nikolai Galen. With thanks to RadioWORM.

(the actual play starts at 2.05. as we were short of the promised 28 minutes radioworm added a long ‘jingle’)

We asked Nicolai to tell us a bit more about the play and he did.

Nicolai about the text;

While choosing and writing the different texts which make up the text as a whole, I found myself attempting to grapple with some specific – and daunting – themes. Namely:

Nicolai about the radioplay;
For the radio version of Hitler we found ourselves layering and treating voices in ways which led me to thinking that we were purposely giving voice to Hitler and the other protagonists without (anyway impossible for the medium) giving them body. The voices are disembodied. They float by like phantoms. The texts we chose for the radio play are particularly obsessed with death – one could say, with the factory production of phantoms. One could also say that Hitler aimed to make his Promethean utopia (which would of course have been the dystopia to end all dystopias) out of death (something he had in common with other great dictators). Perhaps out of death he thought he would be able to resurrect a new (‘better’ for das Volk at least) kind of life. Instead, out of death he only produced the final vast and awful nothing of silence and phantoms. The phantoms of the dead. The phantoms of those – people and cultures – that can never be resurrected.

But our terrible times are less different from those terrible times than perhaps we would like to believe. War carries on unabated in its demented fury, and some of those wars – those in the Middle East – have some of their roots in World War Two. And as we rape and ravage the planet, we also are leaving behind us silence and phantoms, with much more, and maybe much worse, to come. On the one hand it seems an absurd question to say, ‘George Bush was a little Hitler’ but I’m not so sure. The veneer may be politer, and the process of gaining power more ‘democratic’ (but not for the victims, they had no say in it); but was, say, Bush really so much less Promethean, especially when the juggernaut power of the USA is looked at as a whole.

But I don’t want to single out the USA, many other states are just as bad, only not as powerful. Anyway, it seems to me that what happened seventy-odd years ago has rather faded from the memories of many, especially those for whom only the grandparents lived through that war. Trying to bring the horror of Hitler and his accomplices back to life seems to me essential. But let them stay only as voices, as phantom voices. The attempt to give them flesh (as in cinema) just doesn’t seem to carry sufficient horror to be anything other than another entertainment, just another war movie. But when we only hear the voices, they enter our heads, we can’t keep them out, and therefore we have to engage with them. We have to never forget them and we have to recognise that the times have not changed very much at all.

This entry was posted in #29 and tagged RadioWORM. Bookmark the permalink.